4 PonyHans Tells the Story of the Lolvo: It's In Forza Horizon 2

Whether you just use it as a pretext to spend a night out wearing goofy outfits with your friend or you actually want to use humor and ridicule to confront the power of death, point is today most of us celebrate Halloween. Somehow we managed to find the one thing that connects today with the car enthusiasm and it’s a Cadillac hearse grilling machine as cool as it is creepy.
1 photo
They say we’re not supposed to hate what we don’t understand, nor should we judge people just because they are different. Good, we had to start our piece with that.

Now, in case you didn’t know already, here we are telling you there’s a creepy community of Cadillac hearse lovers located in Wayne County, Michigan, who have formed a Guinness World Record worth club. Called The Nightmare Cruisers, they gather around every year in Hell, Michigan to show off their beloved funeral vehicles they custom built. Guinness World Record
And yes, they really got into the books. According to their website, the club’s members are responsible for creating the largest annual gathering of hearses in the world, earning the Guinness World Record in 2011.

One of the members of the car club is the proud (really?) owner of a 1983 Cadillac hearse that contains... Wait for it... The Open Casket Bar and Grill. Steve Frey decided he’ll spice up his car for a bit so he bought an actual casket (without any body in it, of course) and turn it into the ultimate grilling machine. It comes with a four burner propane barbecue, beverage cooler, tow hitch and a cutting board. Stereo system included
But there is no real barbecue without a bit of refreshments and some good old death metal in the background playing out loud. So the spooky grilling casket also comes with a 4-speaker stereo system and skull bottle opener.

Who wants a hamburger? 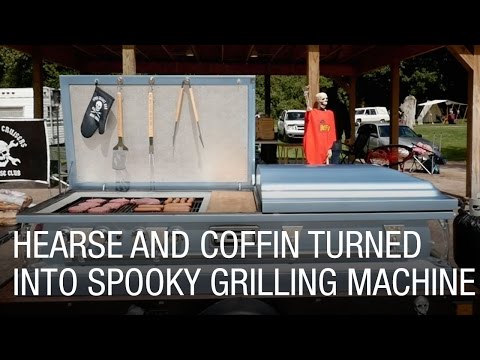