2 Custom 2021 Cadillac Escalade Pickup Is Real, Based on Chevy Silverado

5 2021 Cadillac Escalade Buyers Are Spending $102,000 on Average for Their New SUV
Coverstory

Cristian Gnaticov
Due to its flashy makeover, this Cadillac Escalade may appear ready to star in a rap video. But the thing is that it can do much more than that, like get the party started wherever it goes.
7 photos

A previous generation example, from the 2019 model year apparently, it has embraced a lot of aftermarket stuff, starting with those massive wheels, said to be 30 inches in diameter, 8 inches bigger than the stock ones.

They have a rather trippy pattern, spinning center caps, and a shiny finish that otherwise complements the chrome trim on the outside, in turn providing contrast to the orange looks.

Carrying Virginia license plates that read KNDYLAC, this Cadillac Escalade also rocks a massive sound system that has rendered the trunk useless. We counted no less than eight subwoofers, which, when combined with the multitude of speakers, some of which are likely amplified, turn it into a true party machine.

The vehicle was filmed for a few minutes at a car meet, where it briefly turned the parking lot into a concert hall, in the company of other custom rides.

Now, while enthusiasts keep tuning the older Escalade, Cadillac has launched a new one. It has been in production at the Arlington factory in Texas since the second quarter of last year, and is built around the GM T1XX platform, shared with the Chevy Tahoe and Suburban, and GMC Yukon.

Kicking off the lineup is the Luxury trim level, form $76,195, and despite being the entry-level model, it does feature the curved OLED screens, 19-speaker audio, and a generous range of safety gear. Power comes form the 6.2-liter V8, but the 3.0-liter turbodiesel is available. 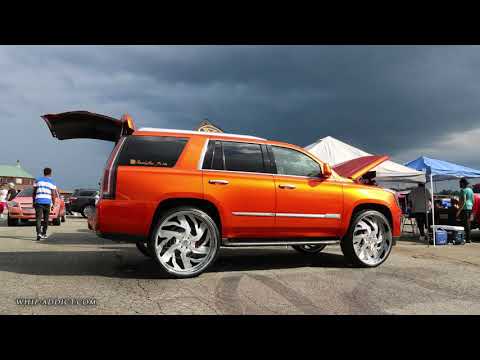