1 Chevy Corvette Z06 Drag Races Camaro ZL1, It's a 7-Second Run for One of Them

2 This Tuned Chevy Camaro Is a Bugatti Chiron Killer, Turns Gas Into Noise Like Few Can

4 CT5-V Blackwing: Cadillac's Most Powerful Car Ever has 668 hp and a Manual Transmission

Racing, drifting, and other dangerous stunts should always be performed on closed courses, as it could all go south in a blink of an eye. However, these young men decided to ignore all common sense, and they put two powerful cars against each other on a public highway somewhere south of the U.S. border.
7 photos

Filmed for the internet to see and shared at the bottom of the page, the stunt brought together two very powerful machines built under General Motors’ umbrella: the Cadillac CT5-V Blackwing and Chevrolet Camaro ZL1. Both of them feature a blue finish, black accents, and privacy windows and look ready to mingle with full-blown exotics.

In Cadillac’s corner, the CT5-V Blackwing boasts a jaw-dropping 668 horsepower. The extra 28 hp over the CTS-V produced by the supercharged 6.2-liter V8, which is derived from the mill that powered the previous-gen CTS-V, and hooked up to either a six-speed manual or a ten-speed automatic transmission, turns it into a beast. From rest to 60 mph (0-97 kph), it needs 3.7 seconds, and flat-out, it can do more than 200 mph (322 kph).

Moving over to Chevy’s stable, the Camaro ZL1 is not exactly a slouch either. Far from it, actually, as it also rocks a supercharged 6.2-liter V8 engine. It has 650 hp available via the loud pedal, and it is a bit quicker than its ad-hoc rival from Caddy. The sprint takes around 3.5 seconds, and on a good day, without any outside intervention, the muscle car takes approximately 10 seconds to run the quarter-mile.

Now that we’ve covered the basics of both machines set loose in Mexico in the video down below, do you think you can spot the winner just by looking at the specs? Maybe, maybe not, but still, you should scroll down and hit the play button to see if you’ve nailed it. 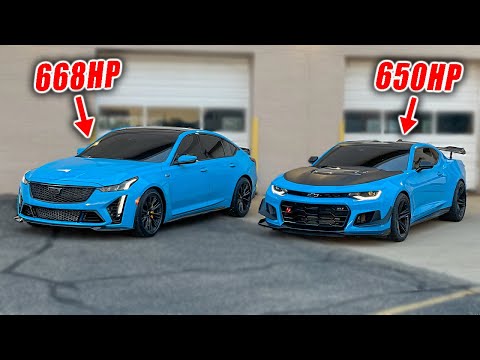