The first sales of the mighty mid-engine C8 Chevy Corvette Z06 are probably just around the corner. Until then, though, GM fans must contend with its predecessor carrying the weight of the series against its ardent rivals.
35 photos

This time around, we have a traditional GM versus Mopar brawl, as the videographer behind the Drag Racing and Car Stuff channel on YouTube has prepared (embedded below, uploaded on June 22nd) yet another enticing feature centered around a nimble Z06 and a big Hellcat. And no, there is no surprise appearance of a Blue Oval, at least not this time around.

Instead, during one clear night, there were no less than four rounds of quarter-mile dragstrip shenanigans showcased at Bradenton Motorsports Park over in Bradenton, Florida. So we apologize in advance for the rather low quality of the footage. Grainy or not, it does not matter, especially not to crimson car fans, as both these hoots were ready, willing, and red.

So, without further ado, round one kicks off with the red Dodge Challenger SRT Hellcat in the left lane and the crimson C7 Chevy Corvette Z06 tucked in the right one, both looking pretty much bone stock on factory tires (at least that is the comment assessment of drag racing fans). Thus, with the machines being kind of leveled (C7 is less powerful but Hellcat is bulkier) out, this is a statement of both driver skill and consistency.

And there is plenty of both, with the first skirmish ready to set the perspective via an 11.24s versus 11.59s result. One nothing for team C7, but to be fair, the next two rounds (from 0:46 and 1:20) see the usual lane switcheroo and the Hellcat tucked in the right lane. Well, it worked like a charm the first time (11.49s for Dodge, 11.5s for C7). But then it was time for some Corvette schooling yet again, as the consistent Z06 performed a couple of 11.4 and 11.44s passes against the narrowly slower 11.51s and 11.66s Challenger. 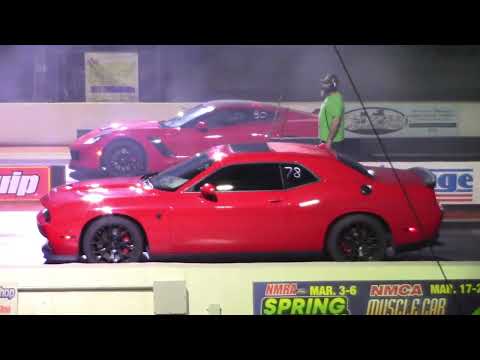