Home > News > Tuning
Alex Oagana
We actually covered the following C 63 AMG Coupe doing a run at the British Vmax 200 event at the beginning of December, but back then it was just a couple of press photos and a Facebook video.
1 photo
This time, the red beast was filmed from both inside and outside the car by regular car-spotter Shmee150, who managed to capture that ear-pounding roar of the M156 engine so good you might want to lower the volume instead of raising it this time.

Modified by the peeps from Rebellion Automotive, this still naturally-aspirated C 63 AMG Coupe is pumping no less 555 hp and 702 Nm (518 lb ft) of torque at the flywheel, which are more than enough to make the derestricted red beast go at least 187 mph (301 km/h) on the improvised drag strip at the aforementioned event.

What we didn't exactly get was how much do the pair of gonads of the C 63 AMG driver weigh, considering he pretty much entered a parking lot at an insane amount of speed. 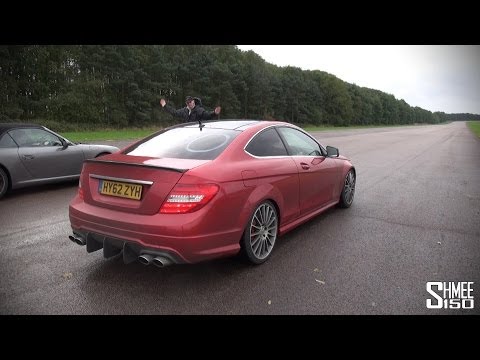