BYD E6 Has a Range of 180 Miles, Buffett Pleased 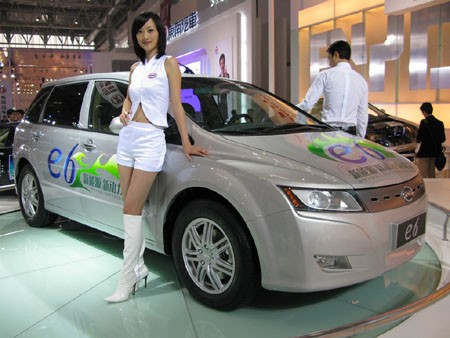 BYD, one of the biggest Chinese car manufacturers and a serious contender to become one of the leaders of the electric vehicle market is experiencing some stock related problems in China, with its shares dropping no less than 19 percent this year.

Founded by Wang Chuanfu, the man considered to be China's richest, is also being partially backed by American billionaire Warren Buffett, who payed a visit to China this week. There, he was introduced to the E6 electric car, BYD's offer for the EV sector.

“BYD is a young and promising company experiencing dynamic growth,” Buffett was quoted as saying during his visit by Autonews. “BYD will play a leading role in the future.”

BYD is placing all its bets on the electric vehicle sector. Having been created with a single goal in mind, manufacture batteries, it got caught up in the game and developed its own electric vehicles, a line spearheaded by the E6.

BYD plans to sell the E6 in Europe and the United States as well, having made a goal of finding a way to assemble cars in the US.

The car is perhaps one of the most capable electric ones in the industry, if we are to judge by the figures provided by BYD. It can run for around 300 km (186 miles) per charge and can be recharged in six hours, lower than the industry average.

As for the price, that aspect has not been clarified yet. Considering the several incentives for EVs in place in China, it's likely though the car will become an instant hit.