Bush-Found 1977 Ford Thunderbird Runs After 25 Years, But Not Without a Fight

Back in the day, the seventh-generation T-Bird (model years 1977 to 1979) started the downsizing trend for the quirky personal luxury car of the Blue Oval. But, fortunately for anyone in love with the oversized representatives of the series, even with a shorter wheelbase and reduced length it still looked humongous to the naked eye.
26 photos

Case in point, check out this derelict yet still fearsomely handsome crimson example of the 1977 Thunderbird age and the way it manages to dwarf popular YouTuber Dylan McCool. In case the up-front size comparison isn’t enough, we can just refer back to another of his interesting Ford projects, that 27-year abandoned Ford Mustang II Cobra he saved for one last run down the quarter-mile strip.

Anyways, while the Cobra makes a cameo appearance (see it at the 37:05 mark), the focus for this feature is on the quest to see if this 1977 Thunderbird will (eventually) agree to run. So, after we find a little bit about the derelict state of the find, complete with a bushy setup (it’s on a property, but folks there probably like to keep it all-natural) and some snakeskin, it’s time for the actual work to start (at the 3:33 mark) after we get to check out some of the details.

As always, Dylan explains a little bit about what compelled him to embark on this particular journey and hints at great plans he nurtured for the car, if he can manage to get it running. The complete details about the twist are at the end of the video, starting from the 44:23 mark, in case you’re too curious to wait out the hard labor part. Now that everyone knows about the upcoming giveaway that will see a lucky fan get this car as the start of a classic vehicle build project, it’s time for the greasy stuff.

Naturally, there’s a lot of it. Luckily, it seems there’s a string of good news, from the fact this wasn’t one of those classic car finds with misplaced ignition keys to the magic moment at 11:25 when the engine almost runs. “It shouldn’t be that easy, but it was,” turn out to be unwise words, because the Thunderbird doesn’t want to get raised out of the slumber without a proper fight. So, it’s only at the 20:22 mark he manages to get it running properly, and there’s even more work to be done until the very first (botched) run (seen at the 31:18 mark). 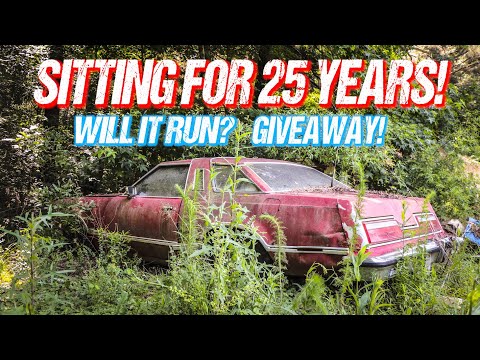