4 Five Cars Made Popular by Movies

5 Burt Reynolds’ Smokey and the Bandit 1977 Pontiac Trans Am Sold for Nearly $500K
Car video reviews:
Up Next

Burt Reynolds's 1978 Pontiac Firebird Gets Detailed Ahead of Sale, This Is What Was Done

Back in 2016, Burt Reynolds acquired a 1978 Pontiac Firebird and had it customized to make it look like the one that he drove in Smokey and The Bandit. While the vehicle was modified in a way to make it resemble the movie car, there were a few changes made that meant it has strayed from the original recipe.
30 photos

First, the vehicle in question is a 1978 model year coupe, while the original Pontiac Firebird Trans Am from Smokey and The Bandit was a 1977 model with a T-top roof. Since the entire conversion was done at Burt Reynolds's request, you can safely say that not even purists should be mad about it.

The vehicle comes with a Butler Performance 8.2-liter V8 engine that is mated to a Tremec five-speed manual transmission. The engine and transmission combo that far exceeds what the original car offered comes as an appropriate fit for the black-over-black body, with gold and gray accents for the Firebird logo.

Other modern elements that have a retro look to them are the 18-inch RAMC alloy wheels fitted with Nitto NT555R tires, which are a bit different from the original ones from the movie, but they still have an adequate look for the time.

The 1978 Pontiac Firebird also comes with QA1 coilovers, while the brakes were made by Wilwood, and they grip on to drilled and slotted rotors all-round.

The company that handled the word did not forget to add a Shaker hood, as well as a custom exhaust system. For the full retro flair, the vehicle comes with a Hurst shifter, as well as a CB radio. The latter is made by Cobra, while the air conditioning system is present and running to allow the occupants to be as cool as they look while driving in this Firebird.

The interior comes with a mix of black leather with gold accents, and it looks pristine. The late 1970s look is interrupted by a Pioneer CD player, as well as the presence of modern speakers from JL Audio.

The best part is that the vehicle has an autograph by Burt Reynolds on the glove box, which also writes "Be safe," along with an exclamation mark.

The buyer will also get a photo of Burt Reynolds with the Pontiac, which goes to show that the vehicle was owned by the actor who made the Pontiac Firebird popular in its day, as well as many years after that moment.

While the Pontiac is currently listed on an auction website with the top bid past $125,000, we can all watch it get detailed by a team of specialists right before it was listed on the said website. 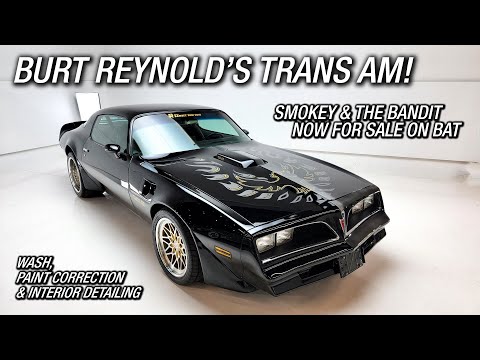 Editor's note: For illustration purposes, the photo gallery shows images from the Bring-A-Trailer advert of the 1978 Pontiac Firebird that was customized at Burt Reynold's request.