2 Frog-Eyed 1974 AMC Matador X Hits the Drag Strip, It's Quicker Than You Think

After recently showcasing a frog-eyed 1974 AMC Matador X hitting the quarter-mile realm at Byron Dragway, the most recent video (embedded below) from the Race Your Ride account on YouTube is now pushing the odd gasser pedal to the metal. With a little help from a cool 1951 Studebaker Champion and an unsuspecting 1969 Chevy Chevelle.
23 photos

So, without giving too much thought, one would easily assume this is going to be a quick and easy battle between an old, aviation-age whip and one of the mightiest muscle cars from the classic golden age. That would also mean the latter has the upper hand, though remember how we always advise to keep an open mind about these dragstrip encounters and always expect the unexpected?

Besides, the videographer’s presentation in the latest feature (uploaded on March 21st, 2022) clearly shows that something is amiss. And we do not just mean that on a styling level. Yes, this gasser is one of the biggest oddities around because it was styled as a tribute to the aviation world with what is now known as the “bullet nose.” Instead, we are also referring to the deeper, technical levels.

The quick initial walkaround should give out some pointers, along with “THE SILVER STUDe” nickname, but above all, there is also the massive fact that we are dealing with a 468ci big-block Chevy V8 engine under the long and aerodynamic hood. Alas, as always, there is nothing like feisty quarter-mile action to paint the picture of more than a thousand words.

So, the battle commences at the one-minute mark when the Champion also meets its foe, the ‘69 Chevy Chevelle sitting proudly on huge rear tires in the left lane. Initially, the skirmish looked quite fair and evenly matched as both drivers took off nicely off the starting block. That is a good appraisal of what perspired in the end, also, as this is another instance when one would call the race a photo-finish, in a nutshell.

However, in the end, there is just one Champion gasser that snatched a cool 11.16s pass against the opponent’s 11.61s Chevelle-style run... 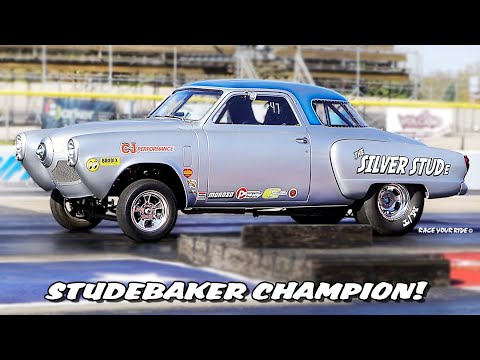