3 Buick Grand National "Hellcat Conversion" Has No Replacement For Displacement

A muscle car built in the 1980s, with a shock-absorbent bumper, a catalytic converter and modern features? Sounds like a tall order. To pull it off, Buick had to think way outside of the box when it developed by Grand National and GNX.
10 photos

It's not like America forgot how to make a muscle car after the 1970s; it just couldn't. And with imports on the rise, Detroit was beginning to give up on the V8 pony as it looked for other sources of income and prestige. But Buick had an interesting idea, to use a turbocharged V6 instead of the usual large-displacement V8.

This unassuming box was one of the fastest-accelerating cars of its age. It's grown to have a cult following, and we think it's also quite sexy in black. An interesting side effect of being a performance god in the slow 1980s is that folks never stopped trying to extract more power out of this setup.

This next car, which is part of an AutotopiaLA feature video, is just such a machine. Proving that you can make a muscle car with a V6, Jeremy crafted this custom turbocharged monster to go fast.

The engine still uses a stock block, but all the internals, the heads, and obviously the turbo are custom parts. The boost hasn't been dialed up all the way, so as she stands, about 550 horsepower reaches the massive Weld beadlock rear wheels. Apparently, when you push closer to 900 hp, reliability could become a problem. Maybe that's why that one guy decided to swap in a Hellcat.

At its peak in 1987, the Buick was powered by its signature turbocharged V6 engine that puts out 245 horsepower, hooked up with a Turbo-Hydramatic 200R 4-speed automatic. GM liked to say that it offered a combination of starting-line power and high-speed cruising ability.

To ensure the Buick can handle that much power, the suspension has been rebuilt around Ridetech coilovers, while Wilwood brakes prove extra stopping power.

Keeping the interior stock is apparently common on these modified Buicks. And while this one still has "grandma's couch" for seats, the fact that it's got a Holley Dash is pure gold. 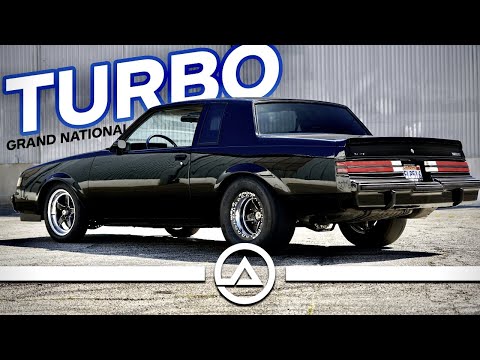