Today was a good day for fans of the Koenigsegg brand. They learned that the upcoming Regera model will be using at least one electric motor and that is all going to be revealed this week at Geneva. Things are about to get even better though, after watching the following video.
1 photo
In it, we can watch two of the fastest cars in the world, going at it in a good old dog fight, on a high-speed oval. This is probably one of the most expensive drag races ever to take place, one that could even teach the guys from Top Gear a thing or two.
Here we have a Bugatti Veyron Grand Sport Vitesse going up against a Koenigsegg Agera R in an all-out race from 50 km/h to over 350 km/h (31 mph to over 217 mph). Any guesses as to who wins?
Well, it would be difficult to say just by the specs. The Bugatti has 1,200 HP and 1,500 Nm (1,106 lb-ft) coming out of its 8-liter W16 engine with four turbochargers while the Agera R has a 5-liter twin-turbo V8 under the bonnet making 1,140 HP and 1,200 Nm (885 lb-ft) of torque.
The problem is, the Koenigsegg is built a lot lighter on its feet, weighing just 2,932 lbs (1,329 kg) compared to Bugatti’s 4,162 lbs (1,888 kg). That means that in straight up acceleration, the win should go to the Agera R but at what cost?
As you can see in the video below, there’s a pretty big difference in how the extreme speeds are felt inside the two cars. While the lighter Koenigsegg seems to try extremely hard to just keep it together, the life in the Bugatti is a lot more relaxed. That’s probably what sets the two apart the most as neither is, in any way, affordable.
While you watch this video (the action actually starts at the 1:40 mark) ask yourself this question: would you rather have a car that accelerates faster or one that is more comfortable and faster on longer stretches? 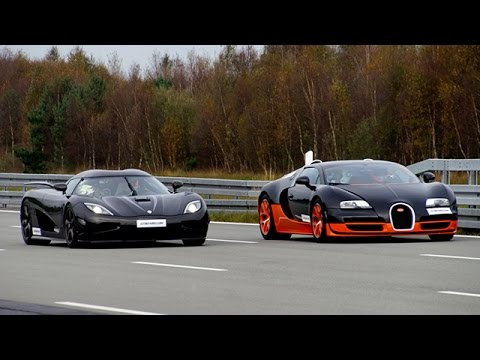