1 Meet the Man Who Drives Bugattis for a Living, and Doesn't Like to Show It

5 Two Bugatti Veyrons Racing at Over 200 MPH Are Too Scary to Watch
Car video reviews:
Coverstory

Speeding on public roads is a dangerous habit, even when performed legally on the no-speed-limit Germany’s Autobahn network. Yet, this middle-aged businessman from the Czech Republic is doing it regularly. One of his most famous runs is that performed in the Bugatti Chiron that he shared in a video on YouTube.
13 photos

When you own a supercar, you sure want to experience as much of the car’s performance as you possibly can. We understand this. After all, you paid for all that performance. Nevertheless, the safest way to do this high-speed muscle stretch is on a racetrack, preferably with professional supervision. Surely that’s a feast Bugatti owners can easily afford, considering the price tag of the car they’re driving.

But then again, you’re not getting to own a Bugatti Chiron by being a nice and thoughtful guy, so it comes as no surprise that supercar owners continue to test their driving abilities on public roads. Just like this Radim Passer fellow from the Czech Republic did more than a few times with his cars. Living in the Czech Republic (a small country in Eastern Europe) close to the German border comes with perks like unfettered access to a no-speed-limit stretch of Autobahn, so you see the temptation.

The crown jewel of his collection is no doubt the Bugatti Chiron and he wanted to do a full-speed test as he does with all of his cars. The test was performed early in the morning on a 6 miles (10 km) stretch of Autobahn with perfect visibility and little traffic. Passer was able to hit a maximum speed of 257 mph (414 kph), which is just about the top speed of the car, limited at 261 mph (420 kph).

As impressive as it may be, let’s not forget this speed was reached on a live public road, posing a danger to other car drivers on the road at the time. This is not something to brag about. The car’s real speed could’ve been a little lower though, as it was recorded using the car’s speedometer and not a GPS recording device.

A well-known Czech businessman, Radim Passer did a similar speed run on the Autobahn six years ago in a Bugatti Veyron, his top car at the time. He also regularly drives his cars on Autobahn and records these adventures for the “car vs autobahn” YouTube series. 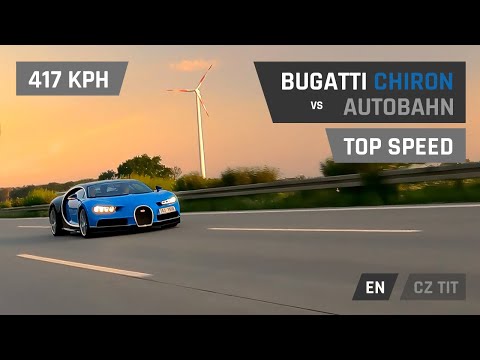