1 $4 Million Bugatti Chiron Gets Pulled Over by the Police, Because the Law Is the Law

2 Bugatti Caught Lying About the Chiron SS's 0–60 MPH Time, Here's How Quick It Really Is

Bugatti Chiron Gets Slowest Review Ever (Sort of), and It Was All Because of French Fries

Cristian Gnaticov
These past few months, more people, who weren’t born with silver spoons in their mouths, got the chance to jump behind the wheel of the Bugatti Chiron and experience its sheer power.
13 photos

We’ve seen quite a few reviews of the Molsheim hypercar, a millionaire who could be the reason behind the Autobahn’s no-speed-limit ban, and the occasional drag race. What we haven’t seen, correction, hadn’t, was a quick drive to McDonald's, and if you had it on your bucket list, then you can finally delete it, and it’s all thanks to Mat Watson.

The famous journo had another encounter with the Bugatti Chiron, this time in the Super Sport configuration, and since he had to do something fun for the YouTube channel, he decided to take it to McDonald’s, in France. You see, such a video would normally be boring, but this is a multi-million dollar exotic that we’re talking about, and it is bigger than you probably think.

See where this is going? Yep, the narrow road around the fast-food restaurant, which was very difficult to navigate, even with the car’s nose sitting as far away from the ground as possible. The parking sensors were constantly beeping, and one man had his eyes on the curb, and the expensive wheels, side skirts, and bumpers, in order for the Chiron to drive away unscathed.

Several butt-clenching moments later, the vehicle, which was smelling like French fries, left the drive-thru and headed to the highway to prove, once again, that it can rearrange its occupants’ organs at a hard push of the right pedal. And since the police was not involved after the 186+ mph (300+ kph) joy ride, we are going to assume that it took place in Germany. You can watch the whole adventure down below, but be warned, you might crave for a snack afterwards. 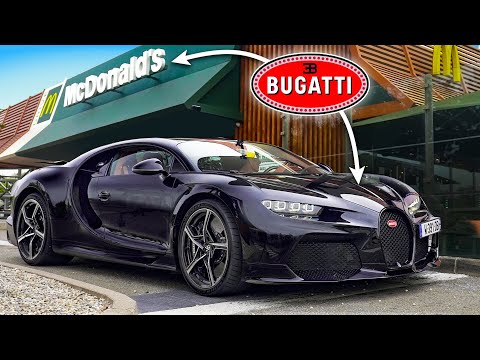