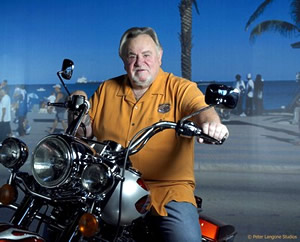 Owner of 15 Harley-Davidson dealerships, including the enormous Destination Daytona, Bruce Rossmeyer was killed in a road crash on July 30, while riding from a Harley Davidson / Buell dealers meeting in Colorado on his way to Sturgis.

The line of six riders was passing a pickup truck pulling a camper trailer in the western part of Wyoming on Highway 28, when it merged into the other lane.

"The pickup slowed and activated his left signal. Four of the motorcycles passed to the left... When Mr. Rossmeyer attempted to pass, the truck made its left turn and he hit the driver's side door. The sixth motorcycle swerved to the right and avoided collision," Lt. Shawn Dickerson of the Wyoming Highway Patrol was quoted as saying by MCN.

Unfortunately, Rossmeyer, who was not wearing a helmet, was declared dead on the scene. Dickerson described the road as "straight, dry and flat." He said the "extremely rural road" is an option to Sturgis, but not the primary way to travel there.

A father of five and grandfather of seven, 66-year-old Rossmeyer also was co-owner of two Daytona Beach area car dealerships. He was a longtime supporter of various charitable causes that benefited children.

Richie Morris Racing and Danny Eslic, who race in AMA Daytona SportBike, were sponsored by Bruce Rossmeyer. "Bruce was first and foremost my friend," said Richie Morris. "He stood by me through the good and bad years. We have been partners in racing since 1994. The racing community just lost a loyal supporter and he will be greatly missed."

"It was really unfortunate about the passing of Bruce Rossmeyer and we dedicate this win to him," Eslick said. "He was a great guy and our teammate. The family said 'go win a championship for us,' so this is the first step."