5 Tech CEOs and Their Favorite Rides, From Collectibles to Daily Drivers
Car video reviews:
Up Next

Most car aficionados have at least heard something about Bruce Canepa. Perhaps it was about his previous exploits as a racing driver that brought him a third position at the 1979 24 Hours of Daytona or the Pikes Peak International Hill Climb recognition. Or maybe it had something to do with his more recent endeavors as a one-stop shop for car sales, restoration, design and customization. Porsche enthusiasts, on the other hand, know him because of his enduring affair with the 959.
28 photos

There’s no need to believe us, because the Petersen Automotive Museum decided to spend some quality time with Canepa in his lair (video embedded below), where the renowned workshop owner directly expressed his passion for Porsche’s first supercar and ultimate expression (at the time) of the 911 series.

Everything started back when Porsche was at a decision-making crossroad regarding the future of the 911 series – with the German sports car maker brooding up plans to eliminate the rear-engine models in favor of water-cooled front-engine models.

Luckily, history showed us a different course thanks to the 959 – which was initially brewed as a model destined to face off the competition in the infamous Group B of world rally racing. Of course, it was phased off because it was becoming way too dangerous and Porsche headmasters decided in turn to build the ultimate 911.

The 959 was born 33 years ago as the most technologically significant model of its time within the Porsche stable, and there were just around 290 road-going examples made during 1987 and 1988 (337 in total, with pre-production units and prototypes, as well as an additional eight in 1992 and 1993).

Canepa was the first North American owner of the 959 (the car was passed on to Paul Allen) and he also helped secure an example for none other than Bill Gates. The rest would be history if not for the Canepa Design upgrade program that started back in 2003 and continues to make bespoke street-legal 959s (dubbed 959 SC – Sport Canepa) for collectors.

Interestingly, Canepa not only explains why he loves the 959 so much – but also gives us a great behind the scenes look at the process involved with rebuilding the Porsche supercar in his workshop.

And we see not one, but around four reimagined 959s, beginning with a lovely silver example (jump to the 2:55 mark) that was stripped down to the bare bones after previously being brought over from... Japan. It’s a pristine example with less than 1k miles on the odometer because it was initially acquired by Nissan for evaluation purposes.

Canepa shows us more than one unit because each has reached a different stage of the reinvention process that includes thorough upgrades to every single piece of the car (from new coilover suspension to 800+ hp engine with 650 lb. ft. of twist), culminating with a close-to-completion “Irish Green” example that still lacks just a few more bits and pieces. 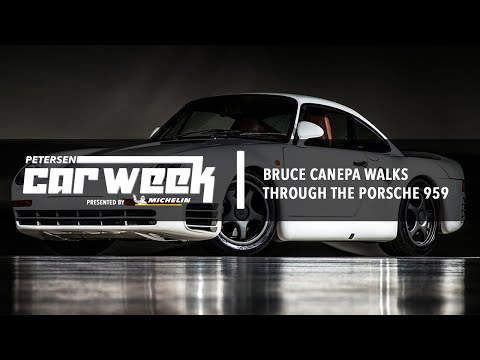