1 Unwrapping a Lamborghini Aventador: What Happens When You Remove the Second Skin

With carmakers having done their homework for this Sunday's Super Bowl 50, don't expect dealers to sit and watch as the Carolina Panthers and the Denver Broncos battle it out on the fields.
1 photo
We're referring to a particular dealer here, namely Lamborghini North Los Angeles, with the company being more than prepared for the face-off that will decide the NFL champion.

Predictably, the dealer is playing the Raging Bull card for the game. But instead of coming up with a banner or a Facebook page, these people have used an aluminum approach, namely a pair of Huracans - amusingly, our text editor wants us to write "hurricanes."

The two Sant'Agata Bolognese machines have gained attires that allow them to act as V10 mascots for the game. To be more precise, the Broncos are represented by an Orange Huracan, while the Panthers are impersonated by a black incarnation of the Gallardo's successor.

As you'll be able to see in the footage below (hat tip to duPont Registry for bringing the clip to our attention), the resulting V20 duet has been taken for a spin on LA streets.

Since we're talking about a combined output of over 1,200 horses, this is the kind of real-life ad that, to our eyes, beats some of the otherwise well-planned official Super Bowl ads we've seen this year.

With the Huracan's performance being matched by the kind of drivability no Lamborghini has offered before, we can see why the dealer was ready to unleash these two bulls around town.

Another treat of the Huracan is its exhaust sound, which makes it one of the most violent supercars money can buy. Unfortunately, the soundtrack of the video doesn't dip into the aural potential of the stunt, but we expect LA inhabitants who happened to witness the shooting of the clip to have been well treated. 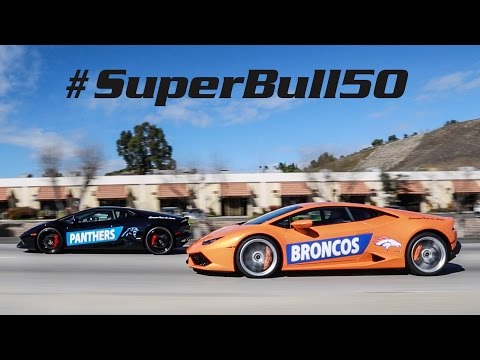