1 MiniZag Ultra Is a Great City e-Bike, Has a Clever, Patent-Protected Folding Mechanism

2 Tuck Bike Is the World’s First Bike With Folding Wheels, Compact as a Suitcase

3 Brompton Folding Bikes Designed by Popular Musicians, Up For Sale

Brompton Redefines Itself With Its Lightest Folding Bike Ever, It Weighs Just 16 Lb.

British bike manufacturer Brompton has always strived to stand out from the crowd and be more than just another forgettable name in the industry. And the best way to become memorable is to constantly outperform and reinvent yourself with each product you release. The T Line titanium folding bike makes no exception, claiming to be the lightest one in Brompton’s lineup.
7 photos

Brompton first got our attention last year, when it teamed up with Crew Nation to auction some really cool bikes designed with the help of famous musicians and bands, the likes of Enrique Iglesias, Radiohead, Foo Fighters, and more. All the profits went to charity, supporting the live music industry, which was severely hit by the global health crisis.

But the U.K.-based company is in the folding bike-making business since 1975 and rolls out more than 45,000 bikes every year.

The T Line is the latest model from the manufacturer, described as “Brompton reinvented”. It is an ultralight folding city bike and the lightest one in its lineup so far, weighing just a bit over 16 lb. (7.4 kg).

It features a titanium frame that is 37 percent lighter than Brompton’s all-steel equivalent, making the two-wheeler comparable to carbon road bikes. But the bike’s weight doesn’t affect its sturdiness, with the T Line boasting of being able to hold up to 242 lb. (110 kg).

Another notable feature of the T Line is the Brompton “invented” steel-armored carbon seat post, meaning the carbon has been reinforced with 0.3mm steel armor, making it more durable.

You can find out more about the bike on Brompton’s website, where you can sign up if you want to be among the first to get the T Line. Brompton doesn’t mention when it plans to make the bike available, nor how much will it cost, although according to Bike Radar it won’t be cheap, at close to $5,000. 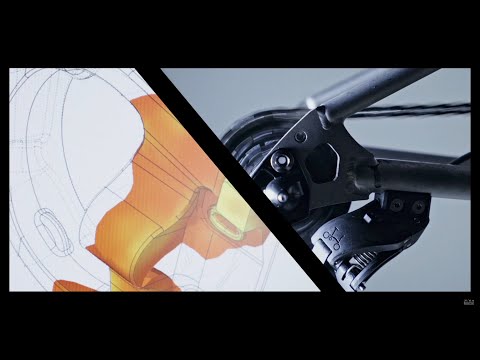