4 The Wheelmen Custom Bike Is for the True Connoisseur, Costs $35,000

Brompton Folding Bikes Designed by Popular Musicians, Up For Sale

Home > News > Free-Roaming Wheels
Cristina Mircea
British bike manufacturer Brompton released 14 folding bikes that are custom-designed by popular musicians, and they are up for sale now. Enrique Iglesias, Foo Fighters, and Radiohead are some of the names that support the initiative.
22 photos

The bikes are part of Brompton’s campaign to support LIVE music. They are being auctioned right now on Greenhouse Auctions. All the profits will go to Crew Nation, a global relief fund launched by Live Nation Entertainment (LNE), to help artists and the live music industry during this health crisis.

All artists have brought their contribution to the design of the two-wheelers, some wearing the band’s or musicians’ logos, others featuring album artwork, initials, or illustrations.

During this last year, the entertainment industry has taken a hard hit with music gigs and festivals being canceled or postponed indefinitely. Musicians as well as people working in the tech staff have been financially affected.

At the same time though, the bike industry is booming as people are more inclined to use this alternative means of transportation over the public one and cars in general, for obvious health reasons. This campaign is Brompton’s attempt to give something back and help people in the music industry, according to Tevis Jory, North America Sales Manager at Brompton.

Brompton is a London-based company and manufactures folding bikes that are sold in 47 countries worldwide. It produces around 70,000 bikes a year. The company has been around since 1976. 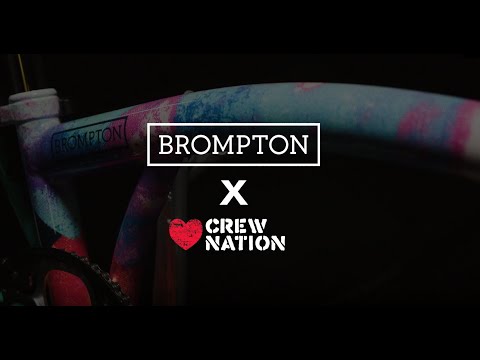