1 Britney Gets Behind the Wheel, a Helmet also Involved
Car video reviews:
Up Next 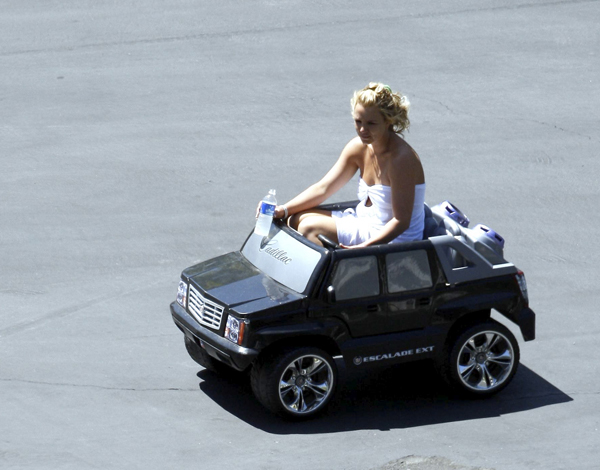 First of all, don't worry, Britney's just peachy, she wasn't hurt in any way. And anyway, she has been through so many car collisions and incidents that she's bound to have built up a tolerance. Naturally, paparazzi were involved in the whole thing, but before we go any further, let's see how the whole thing allegedly happened.

The event was picked up by TMZ which claims that Britney was in the back seat of the Escalade when a pap vehicle simply lurched forward and hit the pop star's white Escalade. At least that's what Britney entourage is saying. The other side of the story is that the Escalade backed out and hit the pap car.

It's not sure which of the two vehicles took more damage, but TMZ does mention that the Escalade got dented pretty bad, and they even posted a picture with a the side of the 'bruised' rear bumper. Maybe that's why Britney's people are going to file a police report.

The singer was out in town for a shopping trip and is said to have continued her 'spree' at Wasteland on Melrose. Ain't no little accident gonna stop her from getting her shopping done!

All this after we were hoping for a miracle from Britney. She has a history with cars but she somehow managed to keep on track while go-karting a few days ago. Back then she even managed to get a hold of a little shiny cup, though it's not yet known if it was a consolation award or an actual prize.

Guess it's just not meant to be, cars and Britney simply don't mix, especially when you add a dangerous number of paparazzi to the mix. At least no one got hurt this time.

It also has to be said that the growing number of photographers that prowl the Hollywood region have been a reason of concern to a point that more and more people demand a law be passed to set legal bounds on the matter.