2 Why You Should Never Ride Near Trucks

4 Motorcyclist Crashes On The Dragon, Sits In Ravine For 30 Hours

5 Study Finds Strict Speed Enforcement Is Bad For Road Safety, We Knew All Along
Car video reviews:
Up Next

British Rider Gets Cut Off, Calmly Deals With The Driver

I can’t tell how many bike versus car road rage clips have you watched recently, but they never go as smooth as this one. Maybe you should take note on how to deal with it next time from this bloke.
1 photo
Keeping your calm in traffic is a key skill when riding, even if some guy on the other lane is two-thumb buried in his smartphone and almost hits you. Yeah, I know, it’s the hardest thing on Earth not to smash his window and chug his phone up the rear end, but being zen will take you further down the road safely.

You might feel unbeatable with your lid on and full armor, but you don’t know what kind of person sits behind that 2-ton motorized steel cage and what his/her intentions are.

Responding with violence will only generate more violence in most cases, and unless there’s a total gridlock, some demented cagers might hunt you down for just flipping them the bird for a mistake they know they did.

On the other hand, you could try the total opposite. I have noticed that simply pulling up to a driver that did something wrong and giving ‘the stare’ will make him/her way more uncomfortable than simply shouting and cursing on their driving style.

And this works even if you did a mistake and pissed some cager off. Just sit and look at them without saying a word. Or even better, smile and salute them. It totally confuses them and will most likely feel bad for shouting afterward.

Or, you can try to solve it like this rider in the most British way. Pull up, ask why they cut you off, give them some advice and then ride off. Don’t forget to wish them a nice day before leaving. 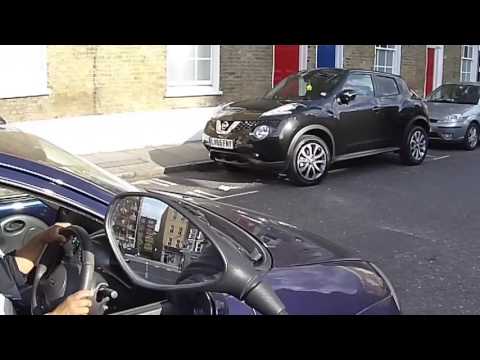