3 Google Gets $2,250 Fine for Showing Woman’s Cleavage on Street View

Brit Owns Real-Life Back to the Future DeLorean, Runs Business with It

We all love one particular movie, whether it’s a Sci-Fi famous blockbuster, a classic romance or even a documentary. Ollie Wilkey from Keynsham, south-west England, kept searching for a way to get his own Back to the Future DeLorean car ever since he was a kid. Today, he owns two models, one of which is a real life replica that features everything from a flux capacitor to a Mr. Fusion Home Energy Reactor.
7 photos

Not only did he make his childhood dream come true, but the 25-year old self-employed fellow even got to use his DeLorean Time Machine to open his own business.

Barcroft reports the car was built in Florida by an ex-NASA engineer and Universal Studios constructor, and later bought by Ollie’s friend, from Leeds. It was this February he paid a five-figure sum for it and ever since he brought it home the man admits he still has passer-bys asking him to take a picture with the car. You feel like travelling back in time
The machine might not be able to literally go back in time, but its interior acts like that the moment it reaches the 88mph mark, just like in the movie. It activates a special “time travel sequence” which includes lights and sound effects, that will make you feel like Marty McFly and “Doc” Brown.

Inside, the young entrepreneur keeps a hover board, Grays Sports Almanac, self-lacing shoes and a JVC GR-C1 camcorder as used by Doc.

Apart from still taking a spin with the car along his girlfriend, Ollie Wilkey is now running a renting business with it, as he claims people use the vehicle for weddings and anniversaries.

In case you’re planning to really impress somebody with the ride of their life, maybe going back in the future would be a good idea... 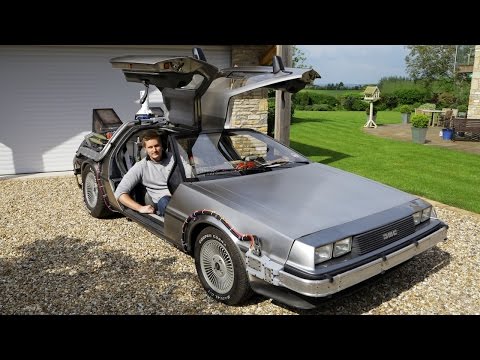