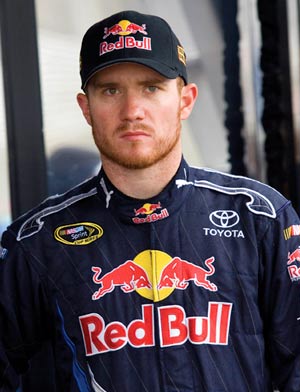 Brian Vickers has chosen to move into the right direction after the much-discussed crash in which he was involved during the Daytona 500 and clinched pole position for this weekend’s Auto Club 500 at Fontana California. The Red Bull Toyota driver scored the best lap of 39.250 seconds at an average speed of 183.439 to secure first place on the Sunday grid.

Vickers was the 4th driver to enter the track during the qualifying session and made the best of the high track temperature in the afternoon to set the first lap time overall. His run was not to be matched until the last run of the day, although reigning champ Jimmie Johnson was close enough, only 0.059 seconds behind the Toyota driver.

“Obviously, the best way to move on from a situation or controversy is to give them something else to talk about. So far, we've done that this week in a positive way. The best way to resolve that this week is to come here and just do the best we can, start on the pole, lead every lap and win the race,” said Vickers on switching from crash victim at Daytona to pole winner at Fontana.

“We had a good car in practice but honestly I didn't think it was a pole car. We were a little too tight, we made some changes after practice which obviously worked really well and that car was just on rails in qualifying,” added Vickers.

Hendrick Motorsports’ Johnson had a different view on the fight for pole position.

“It was a good lap. I missed (turns) one and two a little bit and I think that kind of hurt me in the end. The only other thing I can think of is (Brian) Vickers and I went to IN-N-OUT Burger last night and I had the double-double and he had a single. So for 5/100 of a second, I guess that extra patty killed me,” said the 3-time Cup champion.