5 These High School Students Are Racing Against the Law in the Most Literal Way
Car video reviews:
Coverstory

The McLarens have quickly established themselves as real drag racing monsters. The 570S is one of the least powerful models - only "beaten" by the 540C - but that doesn't mean it should be taken lightly when lining up on the grid of a drag strip.
7 photos

But drag racing is by definition an American affair, so the Detroit muscle cars are not going to move over and allow these foreign invaders to have their way. In the absence of a true muscle car, America's darling sports car, the Chevrolet Corvette, will have to do.

To make matters worse, the owner of this particular Z06 also chose the manly option (also more affordable, but we doubt that was his reasoning) of having his car fitted with a seven-speed manual transmission. Can you spell "wheelspin?"

The McLaren 570S, on the other hand, only gets 570 hp from its tiny 3.8-liter turbocharged V8 engine. Torque figures are even worse at 443 lb-ft (601 Nm), but it does have a few aces not so much hidden up its sleeve. One of them is the more aerodynamic shape, while the other is the lower weight.

But what must have made the difference in this duel (you won't take that as a spoiler, we hope) was the automatic transmission. The McLaren is able to make the most of that power and minimize wheelspin using electronic controllers, something the left foot of the Z06's driver can't even begin to dream of. It also can't engage and disengage the clutch in just a few milliseconds, no matter how hard he tries.

Still, showing up in a 659 hp car with a manual transmission takes courage and determination. Besides, he can always make the defeat seem less bitter by thinking of the price difference between the two stock cars. For the money spent, that Corvette was a steal. 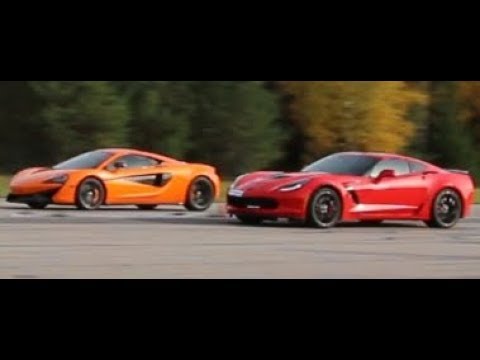