5 Police Chasing Stolen Porsche 911 GT3 Is the Kind of Auto Content You Need
Car video reviews:
Up Next

Harley-Davidson Enzo Is How Ferrari Looks on Two Wheels

Just when you could almost be mistaken to assume you’ve seen it all, humanity delivers. Today, it does so with help from a car thief in Michigan with clear good taste but very little skill in the way of car-thieving.
6 photos

Obviously, when it comes to success in this particular field, we’d wager actual skill weighs heavily in the balance than good taste in cars. This is a lesson learned the hard way by this dude, who walked into a luxury car rental company in Southfield, Michigan, set on the Bentley Flying Spur in the parking lot.

The initial report from Local 4 Click on Detroit is available at the bottom of the page. Sam Zahr owns Dream Luxury Car Rentals and he’d just added the Flying Spur to his collection of rentals. On Monday, a man stepped out of a white Ford Escape and professed interest in the Bentley, so an employee showed him around. When no one was watching, the man stole the Bentley’s keys and eventually walked away.

He returned the next day and, using the key in his pocket, simply walked to the Bentley, which was still parked outside, and drove off. Both times the surveillance camera was recording, and this proved to be the thief’s downfall because he wasn’t wearing his mask right. Meaning, he was wearing it under his chin, which made it easy for police to track him down.

The same media outlet reports that, after Zahr offered a $3,000 reward for a tip leading to the car, he received several of them. He passed them over to the police, which located the stolen Flying Spur outside an apartment complex. Nearby was the white Ford Escape, so all they had to do was wait for the thief to come out. After he was arrested, police found the Bentley key in his pocket.

The whole incident played out like a silly comedy script, mostly because of the thief and the hilariously bad decisions he made along the way. Southfield Police Chief Elvin Barren describes it as “community work at its finest,” which is accurate, but also not fully illustrative of how stupid the entire heist was. Like, if you’re going to drive off in a $220,000 car that is not yours, at least make sure no one sees you. 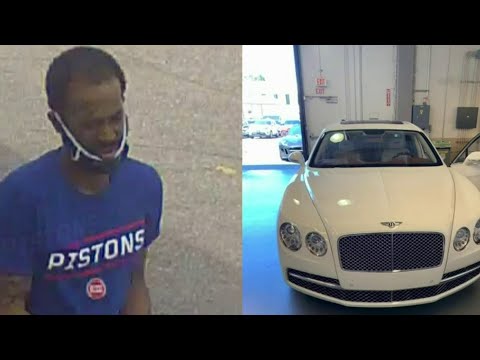