1 $120 Million Alfa Nero Superyacht Pops Up in Antigua, Still Has Tracking Turned Off

2 The U.S. Will Sail the Seized $325 Million Amadea Superyacht Within Days

One of the most spectacular and highly-mediated catches by the National Crime Agency and the British Ministry of Transport since sanctions against Russian oligarchs were imposed is PHI. A brand-new and impressive superyacht, PHI was arrested in London at the end of March – and remains there still.
9 photos

Since February 24, when Russia invaded neighboring country Ukraine, several EU country members, the U.S., and other territories have imposed sanctions against oligarchs with ties to President Putin. Luxury assets like superyachts, real estate, private jets, and entire car fleets have been arrested, seized, and impounded as a means to “punish” these oligarchs for funneling cash into the war effort.

PHI is one such asset, and its fate remains undetermined as of the time of press. Superyacht watcher and experienced former superyacht crew member eSysman was in London the other day, where PHI is still moored at Canary Wharf, blocked from leaving by two locks and a drawbridge. That same drawbridge was supposedly nonoperational on the day PHI was scheduled to sail out and was back in working order the day after NCA agents boarded it and arrested it.

The peculiar thing about PHI is that its owner, Vitaly Vasilievich Kochetkov, is not on any sanctions list – and neither was the businessman authorities believed was the owner back then, Sergei Georgievich Naumenko. If anything, Kotchetkov is in trouble back home and has been charged with fraud, a go-to practice to get rid of undesirables. As eSysman points out, not all Russians are bad, and PHI’s current situation might be just a political PR stunt.

Politics and geopolitics aside, PHI is a most spectacular build.

Small compared to other Russian-owned superyachts, it’s just 58 meters (192 feet) long, but offers generous interior space. Built by Royal Huisman, it is the largest in its class (under 500 GT), and features a fast displacement hull, a classic and beautiful superstructure, and reportedly outrageous amenities like an infinity wine cellar and a sustainable pool. It was delivered with its own shadow boat, PHI Phantom, a 118-foot (36-meter) vessel fit to carry a tender and boats, a variety of water toys, motorbikes and a car, and extra fuel supplies.

For a better appreciation of just how gorgeous PHI is, here’s a video of it stuck in London. 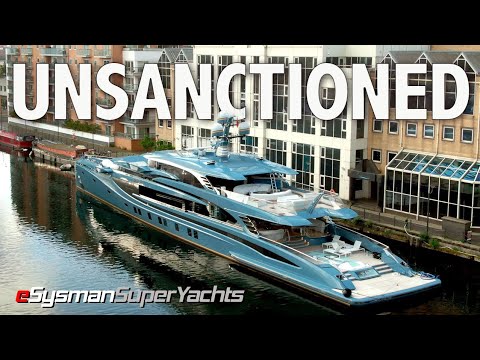 I have worked closely with @NCA_UK & the @UKBorder’s Maritime investigation Bureau to intercept the £38m - Phi.

This Government will continue to take robust action against anyone benefiting from connections to Putin’s regime. pic.twitter.com/enp9M2tmBB