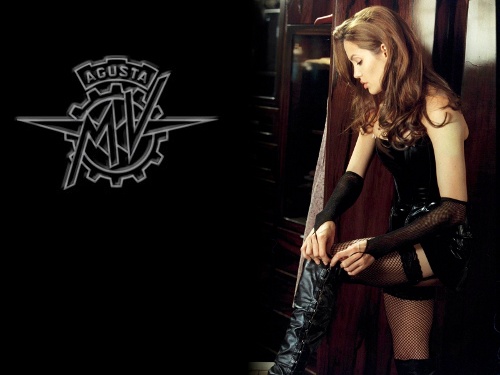 Jolie-Pitt, one of the most famous Hollywoodian couples to date, reportedly share the same passion for two wheeled vehicles. However, if Brad Pitt is known for changing his bikes like socks, Jolie hadn’t owned one for some time. So, when the actress turned 35 in June, her partner bought her a brand new red MV Agusta bike as a gift.

Angelina Jolie celebrated her 35th birthday at the couple's house in Los Feliz, California, which was where Pitt handed the Italian machine over to her. It was quite a surprise for Jolie, who has since taken riding lessons from her husband in order to learn how to properly handle such a jewel on two wheels.

The exact MV Agusta model owned by the beautiful actress was not yet revealed, but we would bet our money on a Brutale.

"I'm not sure what cc it is. But I can tell you it's a proper bike and it's powerful. I used to have a bike years ago, but I hadn't owned one for a long time. Brad's a really good teacher - he's really patient. I'm very impatient so I can wreck a bike if I'm not careful. Sometimes we'll go on the track together and there you can go really fast and let your hair down," Jolie told Britain's Mail on Sunday.

According to some sources, Pitt was set to make a cameo appearance as a mystery motorcycle rider in Jolie's new film 'Salt'. The actor, however, was busy looking after the couple's kids.

"He was almost going to be the motorcycle guy that I knocked down and then he'd call me a bad name," said Jolie. "But he was with the kids that day, and we couldn't work it out."