Brad and Angelina Drive Their Kids in a Chevrolet Suburban 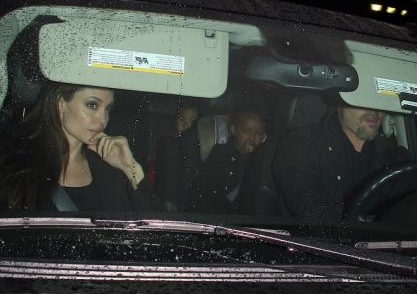 The famous Hollywood coupe was spotted driving away after dining in a Hollywood's Benihana restaurant. The stars got into their Chevrolet Suburban, together with their children. It looks like an intimate family dinner, with no bodyguards involved, so it’s only natural they would be bothered by the presence of the paparazzi.This is partly due to the couple's decision to avoid relying on nannies and chefs too much.

Given their international, jet-setting lifestyle, their super-fit physiques, it's hard to imagine them as a regular mom and dad for their children. However, the A-listers have been spotted before zipping through a McDonald's drive-through or the local Dunkin Donuts. The couple are known to regularly treat their children to fast-food, crisps and sweets.

Brad recently revealed the couple have invested in a giant bed so the six children to join them in the morning. “Yes we have a three-meter wide bed, but even that isn't big enough. They all come crawling in the morning. It's just about surviving! We all have sleep deprivation,” he told BILD magazine.

So what do we think of the car? Well, it is not as cool as a G-Klasse or a Range Rover, but at least it shows that they are a bit modest. Brad is not that interested about what he drives as long as it has four wheels and a steering wheel.

Though he mostly rides his Custom Bobber chopper, Brad has an impressive motorcycle collection that includes a Ducati Desmosedici RR, a Monster 696 and a selection of Harley-Davidson choppers.