2 Autonomous Rovers Being Tested in the SLOPE, NASA to 3D-Map the Moon With Them

4 NASA Clears Design of Its First Lunar Robot, It’ll Be Looking for Water on the Moon

New $100 Million Luxury Jet Concept Is Out of This World, a Flying Superyacht for the Rich

Brace Yourselves: Upcoming Lunar Eclipse Is the Century’s Longest, Visible Across the U.S.

Home > News > Space Junk
Otilia Drăgan
Lunar eclipses continue to fascinate us to this day, even though we don’t associate them with anything mystical, as our forefathers did. There’s something intriguing about the moon turning red as the Earth’s shadow covers it. And this upcoming eclipse will be even more exciting, because it’s remarkably long.
7 photos

There are two great things about this week’s lunar eclipse – it will last for a long time, and it’s visible on most of the planet. This means a lot of us will get the chance to observe this fascinating phenomenon, and we shouldn’t miss the opportunity. After all, this is the longest eclipse of its kind of the entire century. Live Science reports that it will last for three hours, 28 minutes and 23 seconds, breaking the length record of the 2018 eclipse that lasted for “only” one hour and 43 minutes.

The only unlucky folks who won’t get to admire the reddish moon will be those living in Africa, the Middle East and western Asia. Other than that, everybody across the globe, including all the American states, will be able to spot it. Of course, clouds could also be getting in the way, so make sure to watch the weather forecast before making plans for the big night.

The big night will stretch from November 18 to November 19. According to NASA, for those on the U.S. East Coast, the celestial event will begin shortly after 2 a.m., and reach its peak at four in the morning. For those on the West Coast, it will be visible starting from 11 p.m., peaking at 1 a.m.

This incredibly long lunar eclipse is a partial one, meaning that 97% of the full moon will be covered by the Earth’s shadow. The shadow blocks the sun’s light, making the moon appear in a red hue. But partial doesn’t equal less spectacular, since almost the entire surface of the moon will be covered, anyway, so the view will be just as amazing.

The November 19 full moon is known as the Micro Beaver because, in older times, it marked the beginning of the beaver-trapping season, and it’s when the moon is the farthest point from Earth – Live Science explains.

So, get ready for this weekend, when you’ll have over three hours to catch a glimpse of the lunar eclipse that overshadows all others this century. 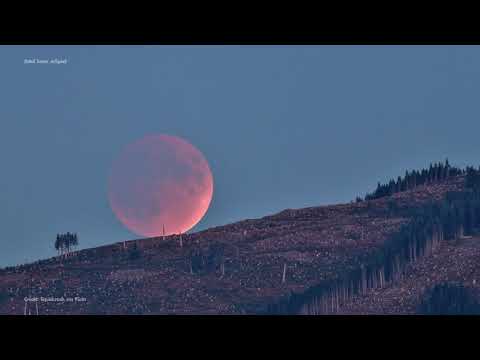