Home > News > Tuning
Alex Oagana
The scariest production Mercedes-Benz G-Class in history became even scarier at the 2013 Frankfurt Motor Show, where Brabus decided it would be a good venue to unleash their version of the six-wheeled behemoth upon the unsuspecting world.
25 photos

Fitting it with the B63S-700 performance kit – which is also available for all the AMG SUVs that sport the M157 twin-turbocharged V8 engine – the nutters from Brabus gave the 6x6 monster no less than 700 hp and 960 Nm (708 lb ft) of torque.

That is no less than 156 hp and 200 Nm (147 lb ft) of torque more than the “standard” version, just by changing the air filters, the exhaust system and fitting a bespoke Brabus ECU.

On top of that, the engineers from Bottrop gave the six-wheeler a new exterior and interior look which pretty much makes it look like what a the devil's spawn might drive if it came over to the world of the living.

Well, not if the aforementioned devil's spawn has tiny legs and/or is a shorty, because the Mercedes-Benz G 63 AMG 6x6 – in Brabus guise or not – is about as tall as a small house and has a ground clearance that can make it run over pretty much everything.

In other words, the 6x6's biggest problem isn't its pricing or the overall ridiculousness, but the fact that you literally have to jump in or out of it.

That problem has now been solved in a pretty cool manner by the crazy minds in Bottrop, and it consists of electrically-operated side steps that can also be controlled by the car key remote, like on the not-so-high Range Rover. How cool is that?

This new feature and quite posibly a lot of others will be presented by Brabus at the upcoming Geneva Motor Show, so stick around. 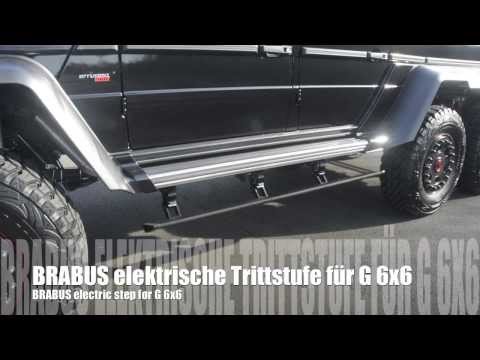