For dragstrip aficionados, there is never a shortage of reasons to celebrate. Sometimes it is even a case of family feuding instead of the traditional Detroit Three skirmish or variations on the matter. However, it is still cheerfully entertaining.
16 photos

They say that some of the best action comes in short bursts. For example, the videographer behind the Drag Racing and Car Stuff channel on YouTube shows us the power of a singular encounter in a 34-second video (embedded below and uploaded on March 12th, 2022). Seriously, one probably doesn’t need anything more...

We have seen what happens when America meets imports. We have also watched what happens when the stock or modified Detroiters meet each other. And we have also witnessed sibling rivalry hit paroxysm. Sure, this time around, we are not dealing with absolute monsters that showcase from the start that something is amiss. With thousands of ponies!

Instead, these two racers might have been labeled as eight-second sleepers if not for the bulging hood on the black Chevy Camaro or the parachute at the back of the vintage Chevy Nova. So, from the very beginning, it is plain obvious this is going to be feisty action at the Beech Bend Raceway Park. And that probably got the attention of the crowd.

Along with the fact this old-but-gold Nova put up a hell of a show even after the green light from the Christmas tree. Complete with a sizeable wheelie, to begin with, a string of bounces to continue, and a crowd-pleasing 8.71s (at 153 mph/246 kph) pass. Or, perhaps, the cheers were directed at its opponent.

While in a world of hurt at the sales level, the modern Chevy Camaro has no trouble inflicting the pain on others at the dragstrip. Like this time, when the quarter-mile run led to a narrow 8.68s (at 163 mph/262 kph) victory! Maybe the acclamations were for both... 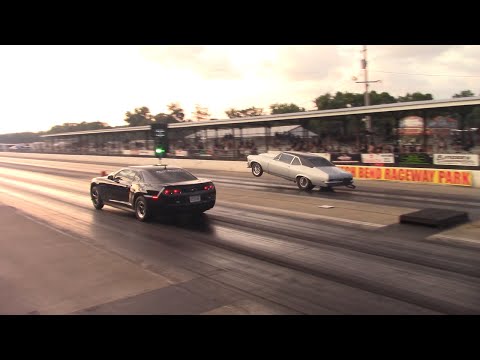