3 Robot Hits Human Volunteers to Find Out If It Hurts

5 The Mailman of the Future Is an Autonomous Robot with Six Wheels
Car video reviews:
Up Next

Boston Dynamics Just Ruined Christmas for Everybody with This Terrifying Clip

We’re kidding, we’re kidding, we love those guys. We just wouldn’t want to run into any of their creations in a dark alley late at night. Or early on Christmas morning.
1 photo
If you ever needed an argument to stop your children from waiting all night for Santa to come, just show them this clip and tell them that if he catches them awake, they’ll end up food for his 23rd-century reindeer.

If that doesn’t work, then we’re happy to inform you that you’re the proud parent of John Connor and that our future lies in the hands of your kid. So don’t take him skydiving or anything that could leave the world in the hands of the robots, OK?

But let’s get back to our present days and Boston Dynamic’s freaky holiday clip, featuring the company’s latest four-legged bot called Spot that substitutes the lovable Rudolph and his fellow reindeer. Santa appears to have suffered some transformations as well, but unlike those of his propulsion system, these were actually for the better.

Spot has been a busy dog lately, training with the US Marines in November, where it served as a means of risk-free reconnaissance, but also did the menial job of carrying things around the battlefield.

We don’t know how you feel about it, but seeing Santa’s sleigh getting pulled by a robot that also has military ties (even though this part is optional) looks quite scary to us. The female Santa sitting in the back and waving her hand as if she were at a beauty pageant or a royal figure on a parade does little to help. In fact, it only enhances the perceived state of abnormality.

But this is Boston Dynamics, so what did we expect? It’s he company currently leading the way in robotics (among the ones we know of, at least), so we shouldn’t be surprised this is how it chose to wish us happy holidays. After all, we’re sure it could have gone for something even worse like a pack of Spots displeased with the presents they got chasing Santa through the woods. Maybe next year. 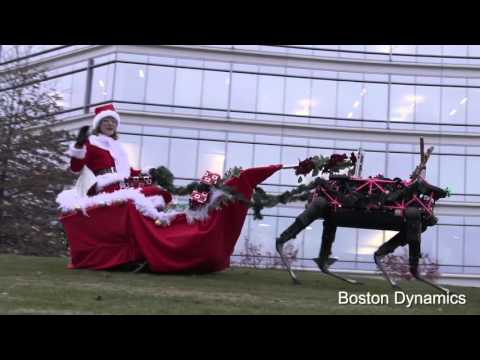