1 2007 Chevy Short Bus Gets Converted Into a Spacious, Stylish, Off-Grid House on Wheels

Home > News > U-turn
Otilia Drăgan
The mobility restrictions brought on by the pandemic are almost entirely gone, but the mobile living trend is here to stay. A big number of individuals, couples, and families used this two-year period to experiment unconventional living, whether on a boat, a camper van, or a tiny home on wheels. It’s incredible how far can today’s vehicle conversions get, and this minibus proves it.
12 photos

Old school buses turned mobile homes affectionately named “skoolies” are roaming the streets in many parts of the world, together with other types of bus conversions. A simple minibus is as plain as it gets, but in the right hands, it can be magically transformed into something wonderful, like Cinderella’s pumpkin.

With help from her father, an experienced mechanic, Elana Coundrelis took a 2003 Toyota Coaster minibus from a plain transport vehicle used by a charity to a glamorous, modern tiny home. Elana and her husband are now traveling around Australia with their new companion. Exploring Alternatives took a closer look inside their home, and you can watch the video tour below.

Its exterior wasn’t changed, and the minibus didn’t get an extravagant new paint job like other conversions. But it reveals an entirely different interior. An unusual feature is that the bathroom is located at the front of the bus, mainly because the couple wanted to keep the large windows as they were for plenty of natural sunlight. This is also where a closet was placed.

Next comes the kitchen, with two counters and modern appliances. There’s enough room for a large sink, a four-burner electric cooktop, a mini-fridge, and top storage shelves.

A U-shaped couch dominated the “lounge area,” followed by a pretty generous bed facing the windows. Most of the furniture comes with an integrated storage room, including the raised bed. There’s also an adjustable mini wooden table.

According to Treehugger, the interior appliances are powered entirely by solar energy through the 350 W solar panels mounted on the roof. Granted, it doesn’t need too much power anyway, since it doesn’t have air conditioning, for example. But, all in all, it looks just as cozy and beautiful as any tiny home. You’d hardly be able to guess that it was a boring transport minibus not that long ago. 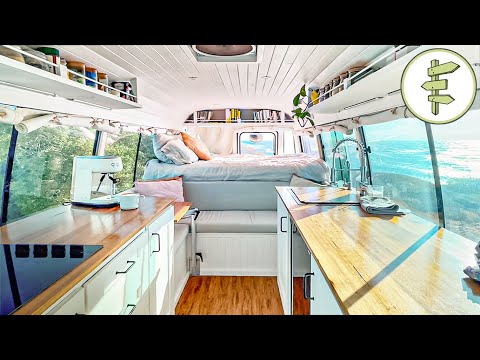