Daniel Patrascu
At the beginning of June, auction house RM Sotheby’s announced the star entry in its 2019 Monterey auction: one of the original 1965 Aston Martin DB5 built to to be used in some way for the early James Bond movies. And there’s video to prove the car is on the lot.
1 photo
Trying to make a big fuss about the event, as they should, Sotheby’s release an auction trailer if you will, showing all the functioning gadgets the car is fitted with.

When it will try and sell the car later this year, the auctioneer will sell a packed car. That is complete with the 13 Bond-specification modifications made by special effect expert John Stears decades ago, including a Browning .30 caliber machine gun in each fender, wheel-hub mounted tire-slashers, smoke screen dispensers, revolving license plates, and a passenger-seat ejection system.

This particular car is one of two ever gifted with these gadgets, but it’s not the car that actually starred in Goldfinger. It was part of the North American promotional tour for Thunderball, the movie that succeeded the first installment.

“No other car in history has played a more important leading role on film and in pop culture than the Aston Martin DB5,” said in a statement when the auction was announced Sotheby’s car specialist Barney Ruprecht.

“This is an unbelievably rare chance to play secret agent in a car that offers incredible performance and style in its own right, and we’re honored to offer the Bond DB5 alongside our partners at Aston Martin.”

That rare chance does come at a price though. Estimates are the DB5 will sell for anywhere between $4 million and $6 million, placing it at the top of the list of expensive cars.

Until we find out how much someone values this car, you can have a look at what it can do in the video below. 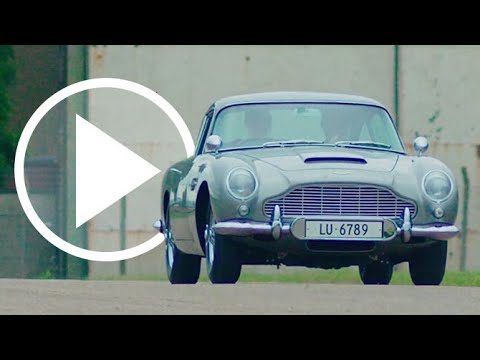