2 U.S. Navy’s Future VTOL Drone Is Best-in-Class, Hovers and Stares Like No Other

Boeing tested the manned/unmanned teaming capabilities of its famous MQ-25 TM Stingray refueling drone in a virtual environment, proving the unmanned tanker’s versatility and its capability to autonomously adapt its behavior in midair.
7 photos

The MK-5 already proved it can refuel another aircraft during flight, in a test conducted this June, becoming the first unmanned aircraft system to ever succeed that. But now the purpose was to prove it can adapt its behavior as the mission changes and evolves.

Using Northrop Grumman’s portable E-2D simulator, its F/A-18 Super Hornet, and the Stingray, the tanker was tested in several virtual scenarios, in a demonstration sponsored by the Office of Naval Research, as Boeing reports. All the tests took place in an F-18 Super Hornet trailer, where everything was installed.

Normally, the MQ-25 is almost always in touch with an AVO (air vehicle operator) that is ground-based, following a plan it’s received ahead of the flight. But when in combat things can change in a heartbeat, which oftentimes leads to cutting off communications. In some cases that’s done intentionally, if an adversary disrupts the network, or if the crew needs to hide from the enemy. In other cases, it might simply get compromised by the adversary, which is why the MQ-25 has to adapt to any given scenario.

For the virtual test, the drone had a mission plan to follow from the carrier, but once in the air, the Super Hornet sent messages via the Link 16 network, asking it to change its plan and refuel the plane in a different location, using a different quantity of fuel.

The MQ-25 has to go through several steps to accomplish its mission, according to Dave Bujold, Boeing’s MQ-25 program director, as reported by Defense News. First, it has to recognize that it now receives different orders than the preplanned ones. Then it has to figure out who’s given the orders, in this case, the manned aircraft in the air (the Super Hornet), not the ground-based AVO. Lastly, it has to translate the message and act autonomously.

The manned/unmanned teaming went well, with the only issue to be addressed being a small software update to the Super Hornet, to be able to send new messages via Link 16. They already exist in the E-2D’s library, but they have to be added to the Hornet. 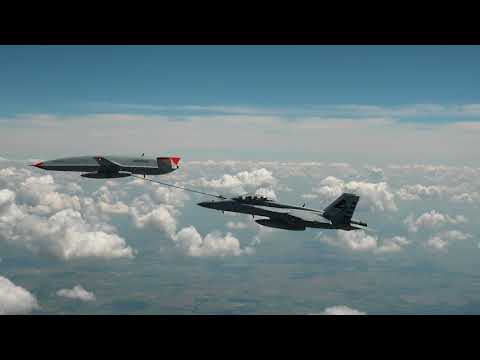