Challenger Hellcat Driver Tries to Look Cool, Flips a Silverado Over Instead

Diesel engines in passenger cars never really caught on in the U.S., and while that may have its benefits, it does mean some gems never made it across the pond. The M50d BMW models are a very good example for that.
363 photos

Looking at the specs sheet, you'd be forgiven to think the M50ds hide a V8 engine of at least four liters under their hoods. After all, how else can you get 395 hp (400 PS) and 561 lb-ft (760 Nm) of torque from as low as 2,000 rpm from a turbodiesel, if not through a large engine block and a high cylinder count?

Apparently, by adding more turbochargers. The more, the merrier certainly applied here as the Bavarians installed not two, nor three, but four of them onto a three-liter straight-six. The result is a powerplant that can propel the X7 luxury SAV to 62 mph (100 km/h) in just 5.4 seconds up to an electronically limited top speed of 155 mph (250 km/h).

So, no surprises here about the vehicle's top speed, then. Well, yes and no. The X7's speedometer shows 162 mph (260 km/h), which is odd for a vehicle that's supposed to be restricted to 155 mph. Not even the GPS measuring device shows the official figure, going as high as 158 mph (254 km/h), which, by the way, makes the X7's onboard speed metering one of the most accurate we've seen.

To say the X7 reaches its top speed effortlessly would be a bit of an exaggeration. It needs 20 seconds to hit 124 mph (200 km/h), but from there on, the miles don't pile up quite as quickly, probably because of the aerodynamics kicking in. It's also a trait of the diesel engine, to some degree, as it's built to deliver most of its grunt in the lower end of the revs.

Sadly, the quad-turbo diesel engine came at a time when its ilk is pretty badly frowned upon everywhere in the world, including Europe, the place where the technology has been cradled for so long. As a result, BMW decided to end its production last year, making this X7 one of the relatively few unicorns out there. With that in mind, you should be ready to enjoy the footage. 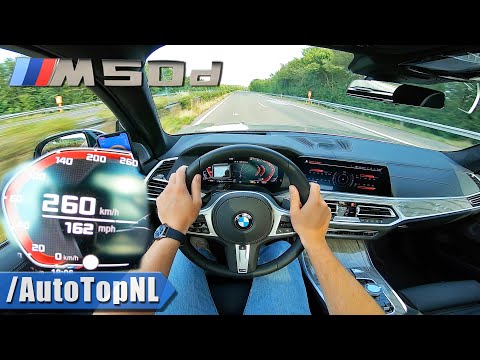