ReachBot Was Designed to Crawl Into Caves, Possibly Even on Mars

Drag racing SUVs used to be the kind of thing people would do for giggles, but these days some of these behemoths are quick enough to smoke a lot of so-called sports cars, so it's fair to say they have earned their respect.
13 photos

There's a host of performance-oriented SUVs from various manufacturers out on the market, so for most customers, this wide variety makes choosing between them more a matter of personal preference than actually checking the specs. If a person is a Range Rover fan, they won't care the Porsche is 0.1 seconds quicker (hypothetically speaking), so they'll still buy the Range Rover Sport with the 5.0-liter supercharged V8.

Still, if you were to chase the ultimate performance while also keeping an eye on the budget, a race like this one is exactly what you need. It features the BMW X5 M, the quickest and most expensive iteration of the Bavarian SUV, with the only upgrade being the Competition package that adds 25 extra horsepower. Even without that, the X5 M still gets 591 hp (600 PS) out of its 4.4-liter twin-turbo V8, putting it well ahead of its two rivals for the day.

The second contender is the Porsche Cayenne Turbo Coupe, the relatively new version of Porsche's sporty SUV that shares pretty much everything with the regular Cayenne Turbo, except having a normal rear end. Looks aside, the Coupe has a great-sounding 4.0-liter twin-turbo V8 with 542 hp (550 PS), putting it at a clear disadvantage over the X5 M.

But that's OK since the last entrant into the race makes even less power. Like the Porsche, it's a proud representative of the SUV coupe segment (its ancestor was actually its founder), and like the X5 M, it's also a BMW. No, it's not the X6 M, but its more toned-down and, just as important, cheaper version, the X6 M50i.

The lesser M SUV shares the same 4.4-liter V8 engine as its full-fledged siblings, except here it develops 523 hp (530 PS). Considering Porsche's habit of understating the power output of its models, its chances of finishing the drag race in any other position than third are slim, if not non-existent. But as someone once said, life is like a box of chocolates. 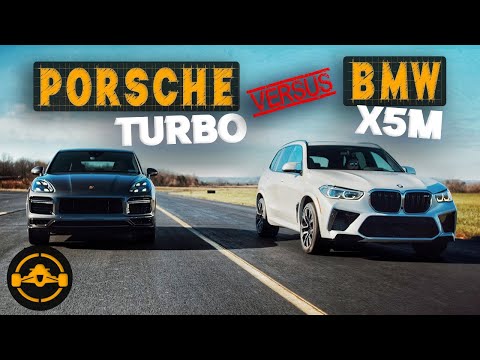