Gabriel Nica
The guys from TFLCar got the chance to test the BMW X5 M, the new Jeep Grand Cherokee SRT and the Porsche Cayenne GTS on the same morning. Of course, the traditional test that the cars were put through was the 0-60 mph time attack.
1 photo
Before they got to the 0-60 timing part, they drove the 3 cars for a little bit. The new Grand Cherokee is impressive. The Chrysler owned company progressed a lot in the last years, further improving its cars to satisfy even the most pretentious customers.

However, when compared to the 2 German cars, even the American guys from TFLCar had to agree that the Jeep is rather blunt and not so graceful. The interior finishes and details have to be improved in order to change the "cheap" look they have and to catch up to the other cars in its class.

It's true, the Porsche and the BMW are a lot more expensive but you can actually see where the extra money went. The interior is a lot more exquisite and refined, not rough like the Jeep's and it really makes you feel like home, comfortable and secure.

As expected, the X5M won with a time of 4.74 seconds, the Jeep SRT came in second with 4.95 seconds and the GTS came last with 5.97 seconds. One thing we should really point out here is that only the Jeep did the run with the launch control system activated, the German cars were simply run on sport modes.

So for now, the X5M is the best out of the 3, even though the guys from TFLCar didn't like the price tag. One thing is for sure: if you want performance, and the best quality for your car, you have to pay for it and it doesn't come cheap. 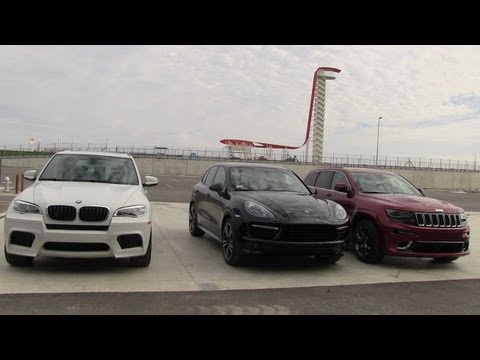