2 BMW Probably Hopes Christoph Waltz' Star Power Will Save the iX, We Bet It Won't

A lot of fans were up in arms back when BMW announced the first all-wheel-drive M model that wasn't an SUV, which only goes to show one more time how reluctant some people are to change and, more importantly, how little they trust the manufacturers they supposedly love.
9 photos

Does anyone really think BMW takes these decisions lightly? Do they imagine the company is completely unaware of what it is about its products that most customers like? Do they worry somebody's trying to sabotage the brand from inside? Do they fear a Mercedes-Benz evil plan hatched to destroy its Bavaria rival?

It's hard to tell, but some of the reactions when the M5 sporting the M xDrive all-wheel-drive system was announced back in 2017 were verging on violent. In the meantime, most people realized that what the system does is actually offer the best of both worlds into one admittedly heavier package. But a weight increase is the norm anyway these days and, besides, it's nothing a little more power can't deal with.

Now, M cars with the M xDrive system have become the norm, which is why Stefan Landmann, a driving instructor for the BMW Driving Experience can use the M8 Competition Coupe to showcase how you can drift using both RWD and AWD mode.

The first one is relatively simple both to initiate and maintain, but a few things you should do before drifting is to make sure you're not on a public road and to deactivate the Dynamic Stability Control (DSC), the system put in place specifically to keep the car from sliding unwantedly. Since throttle control is important, you should also make sure you have the gearbox in manual mode so you don't get a gear change mid-drift as that would almost certainly bring all the fun to an end.

Stefan is spinning the car around a wide circle made out of cones with the surface also soaked in water. Those are ideal conditions since it's safe, there are low levels of grip so maintaining the drift is easy, and it also reduces wear on the tires. Since you probably don't work for BMW, you might want to wait for a rainy day before practicing or consider moving closer to the Arctic Pole.

As far as technique is concerned, the keyword here is "practice". Start drifting by accelerating with the wheels turned in but be ready to counter-steer immediately. Keep the wheels turned in the direction opposite of the drift and make small adjustments from the steering wheel as well as the throttle pedal. Give it more gas if you feel the drift is dying and lift off if you're spinning too much.

In AWD, things get a little more complicated. With the front wheels pulling as well, launching into a drift requires what some people refer to as the "Scandinavian flick". That requires you to steer into the turn, then out of it, then quickly back into it while stepping on the gas as well. What this does is shift the weight of the car from one side to another eventually causing the rear wheels to lose grip.

Unlike RWD drifting, here you won't have to counter-steer. Instead, the wheels will be slightly turned into the corner, but just like before, adjustments are going to be constantly required, as will working the throttle pedal. Have a look at the clip below where Stefan demonstrates everything we've talked about here using the 625 hp of the BMW M8 Competition Coupe. 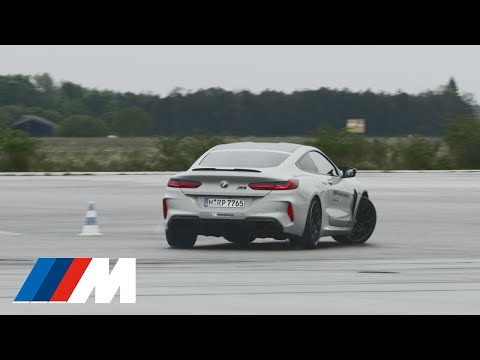