2 Object Behind Mirror Is Weirder Than It Appears: 2016 Ford "Consumer Car" Is Art

BMW's tradition of making art cars is going to turn 40 next year, but the German company's involvement in cultural activities predates that by ten more years.
30 photos

Over the past half of a century, BMW has worked with some of the world's most renowned artists, whether we're talking music, visual arts, or any other type of cultural manifestation you can think of. However, the most famous product of the Bavarian manufacturer's delving into the world of creativity has got to be the impressive series of what came to be known as "Art Cars".

Some of the biggest names in the business, from Jeff Koons, Alexander Calder, or Sandro Chia to Andy Warhol or Roy Lichtenstein have put their signature on a beautifully painted BMW at some point, blurring the line between the automotive industry and the art world in the process. Some artists have taken things a step further by giving the car more than just a simple paint job. Just look at the work of Icelandic–Danish artist Ólafur Elíasson and his take on the BMW H2R, the hydrogen-powered car used to set speed records back in the mid-2000s, which looked like an ice porcupine.

Now, though, to celebrate its 50 years of presence in the artistic world, BMW is revealing its latest project: an art car developed by artificial intelligence. The people behind the scheme are "creative technologist" Nathan Shipley, and Gary Yeh, the founder of artDrunk.

The two fed a computer 50,000 images of artworks spanning 900 years of art history as well as 50 hand-picked works from contemporary artist BMW has worked with before, allowing the AI to form a picture of what art looks like and then come up with its own works. The images generated by the AI have then been projection-mapped onto a 3D digital model of the BMW 8 Series Gran Coupe.

With people fearing AI and robots would take over most of the jobs eventually, the general school of thought was that creative activities would always be safe from such threats. Well, it's hard to tell whether this kind of artistic process will catch on, but we're willing to bet that right now, you're pretty curious to see the AI's take on what artistic expression looks like. 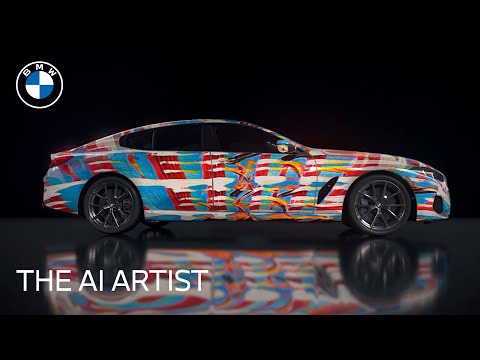