2 MINI Countryman, as Big as it Gets for the Brits

BMW Recaps the First Days of the Geneva Motor Show 2014

Gabriel Nica
This year’s Geneva Motor Show introduced quite a lot of new BMW models to the scene, in the flesh. The entire group (including MINI) had no less than 4 world premieres on the stage, 3 Germans and one Brit.
1 photo
Germany’s 3 world premieres (even though the video says there were only two) were the 4 Series Gran Coupe, the 2 Series Active Tourer and the X3 LCI, all of them being showed in the flesh, for the first time, in the Swiss city.

The first one is the continuation of the Gran Coupe trend into the 4 Series range. Following in the footsteps of the 6 Series, the new 4-door coupe will bring more exclusivity and elegance to the segment and the first true competitor for the A5 Sportback that was ruling this niche all alone up until now. At least that’s what BMW hopes. I’m going to keep my fingers crossed!

The 2 Series Active Tourer was, probably, the most important one of them all, as it is the first front-wheel-drive model in the brand’s history. Rinding on the new UKL platform and pretending to be extremely versatile for young, active people, the 2er was introduced in 218d guise, meaning it’s fitted with the new 4-cylinder 2-liter diesel engine from BMW making 150 HP and 400 Nm (295 lb-ft) of torque.

Last, but not least from the Bavarian corner, was the recently launched X3 LCI that brings a new set of engines to the table (one shared with the 2 Series Active Tourer, for example) and a slightly changed front fascia alongside some new tweaks and tricks inside the cabin.

MINI, on the other hand, introduced a Concept, previewing the upcoming Clubman or, at least, that’s what we’re hoping, as the car they came prepared with looked absolutely brilliant, despite growing a bit more than expected in size over its predecessor.

Of course, all the other usual suspects were also present on the scene, including the new M3, M4, 4 Series Convertible, i3 and i8. Unfortunately, the X4 wasn’t introduced at the European show but revealed exclusively online. We are, however, hoping to see it in the flesh at the New York Auto Show, next month. 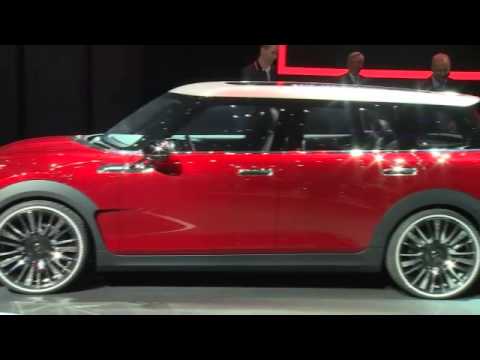