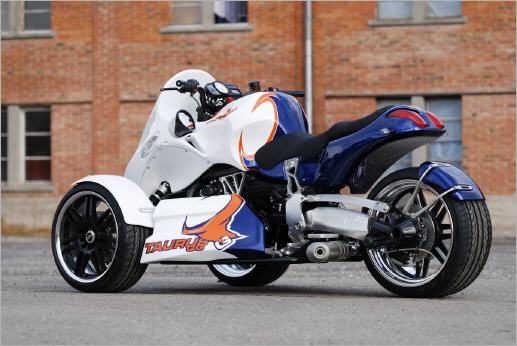 Swiss company Grueter and Gut Technik (GG) is responsible with manufacturing the European-made Can-Am rival that conceals a noteworthy German powerplant. This high performance hammerhead trike is dubbed Taurus and comes with a 1293cc BMW four-cylinder engine, which is enough to make its Canadian competitor tremble.

The big-bore unit is capable of developing 175 bhp at 9,250 rpm and 140 Nm of torque at 8,250 rpm, while being coupled with a 6-gear transmission. We have to tell you that the gearbox has been fettled to include a reverse gear.

The Taurus weighs 397kg without fuel or rider and has a massive 34 litre fuel tank to improve its cruising range. The manufacturer claims a top speed of 220km/h (137 mph) . 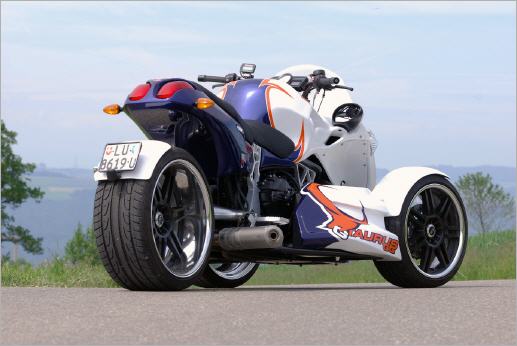 The front suspension is a car-like setup with trapezoidal cross-members made from aluminium. The rear end gets fully adjustable shocks. Brakes consist of 270mm twin floating front discs and a single 284mm rear disc, and the wheels are big 17-inch jobbies at the front and a larger 19-inch hoop at the rear.

European owners can ride the vehicle without a motorcycle licence, needing only a car licence. There is no word whether the Taurus will see any other continents soon, as the three-wheeler has only been homologated for Europe at this stage.

GG also has on offer the four-wheeled GG Quad and GG Quadster, but which are both difficult to get on the road in many countries. The former is powered by an R1150 BMW Boxer engine and the latter by a BMW K1300 unit.