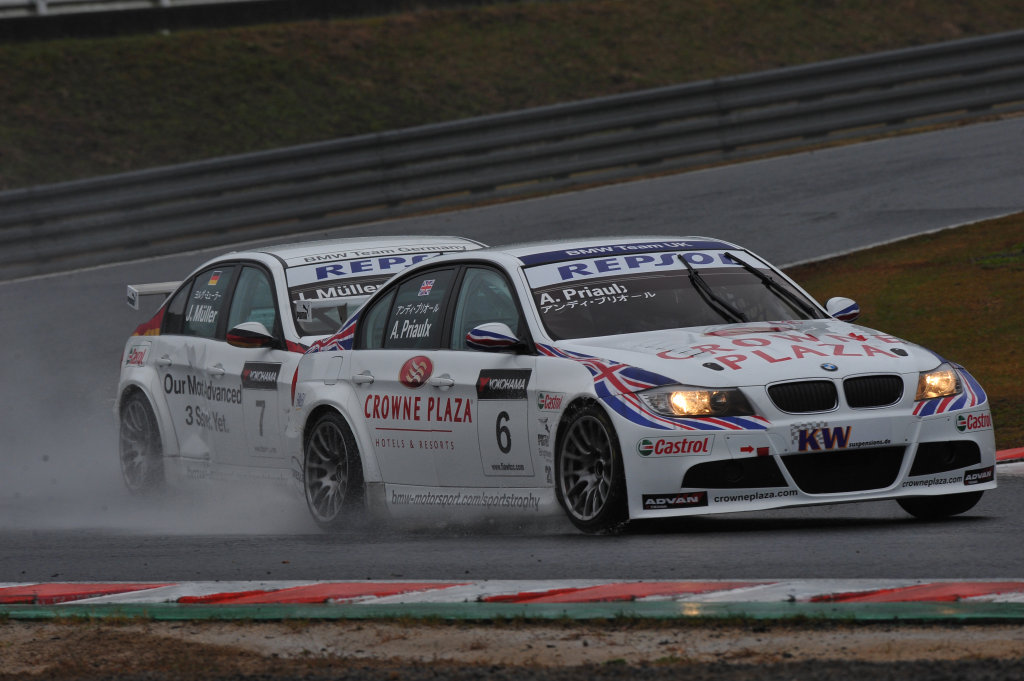 The German manufacturer had a great weekend in Japan for the penultimate race of the season, managing to secure a fantastic double win at the Okayama circuit. Amid a cloudy and rainy weather, BMW cars seemed to have the best setup for the track as Priaulx and Farfus brought home 20 points for the Bavarian automaker in the constructor’s standings.

As said earlier, the first race started on a soaking wet track, with the safety car leading the way for 3 laps. As soon as the safety car pitted and the green lights were on, Gabriele Tarquini accelerated hard in the lead, but a few corners later he went wide and Andy Priaulx took first place.

Tarquini managed to get back in the race and finished fifth, while Priaulx held his position until the finish of Race 1, despite being under pressure in the closing moments from fellow BMW driver Jorg Muller.

Race 1 also saw Farfus go wide in exactly the same corner as Tarquini, but he managed to get back and secured eight place, subsequently taking first spot on the grid for Race 2. This result however, came after a disputable fight and clash with Chevrolet's Alain Menu.

Race 2 saw BMW take yet another one-two, as Farfus claimed the win with Priaulx second. The second race witnessed a lot of drivers going wide in the first corner, so tensions were high, as everyone wanted to overtake and get back in the points chase. Yvan Muller finished third with Alain Menu fourth. Tarquini managed to grab 2 points as he finished seventh thanks to Gené and Rydell, who both dropped down on the last lap.

But the best performance in Race 2 was succeeded by Nicola Larini, who managed to finish fifth after starting from the back of the pack. He was aided by the fact that several drivers went wide in the first corner, but none the less, Larini ran an excelent race also given the difficult track conditions.

D’Aste took the win for the Independents, followed by Porteiro and Coronel. As the WTCC heads for its season finale in Macau, Gabriele Tarquini leads the championship by two points from Yvan Muller and 13 points from Farfus.