2 BMW Designworks Made A Puma Shoe Inspired By The GINA Concept, Will Be In Stores

5 Second Concept Shown by BMW at Pebble Beach Is the 3.0 CSL Hommage R
Up Next

Mihnea Radu
We love looking at concept cars at summer outdoor events, such as Pebble Beach or Goodwood. Natural sunlight paint paints a more vivid picture, which is especially important when a production version is planned.
3 photos

That's the case with the M8 Gran Coupe, a concept that came out so quick that that people didn't even have time to wonder if it would happen. While the 8 Series Concept that came out last year was inspired by the regular model, this previews a high-performance version which could have as much as 650 horsepower.

Everybody who's interested in this high-end segment probably already read the M850i reviews and has a pretty good idea what kind of tech BMW plans to use. For example, the car should have active rear wheel steering, as well as AWD and adaptive anti-roll bars.

Concepts are also supposed to be about triggering strong emotions, and the M8 GC does that. It's like a combination between a hot wheels car with green paint and black windows and a German-made shark car.

The front is about 80% open, with two oversized kidney grilles, one central intake and two more on the sides. Meanwhile, the back features vents that drag away from the hot brakes, so it's a lot like a supercar. Narrow, black taillights are almost hidden under a deep ducktail trunk.

Despite having massive exhaust pipes, the M8 Gran Coupe rolls around silently, which is a shame. We remember enjoying similar pre-production concepts from Aston a lot more over the years.

The M8 Gran Coupe is a replacement for the M6 4-door version. Since the regular 2-door M8 will debut next year, the more practical version should arrive a little later. It should be quite a successful vehicle, especially as it's likely to be one of the fastest production BMWs ever made, due to that AWD system we mentioned. 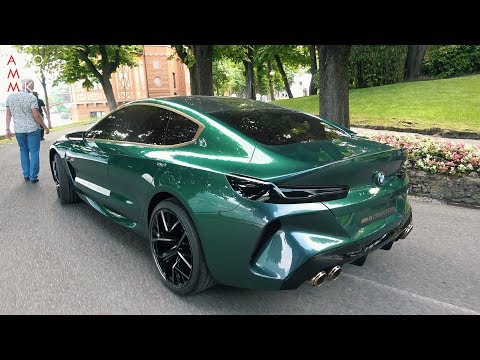