Home > News > Industry
Gabriel Nica
We usually take all the technology and advanced engineering we have today for granted, not realizing just how far we’ve come compared to the early days of auto motoring.
1 photo
Think of it this way - the first ever speeding ticket was given to a Great Britain resident named Walter Arnold of East Penkham on 28 January 1896 for doing 8 mph (13 km/h) in a 2 mph (3.2 km/h) zone. That speed was considered dangerous and reckless.

Well, since back then cars were extremely different than what we’ve grown to know, doing such a speed could be considered dangerous. Not today though. Today, we have streets that have no speed limit and 2 ton bullets that simply test the laws of physics.

One such ‘bullet’ is BMW’s M6 Gran Coupe. This car is special in more than one way. It’s the first Gran Coupe ever made by the Bavarians, following in the footsteps of the Mercedes-Benz CLS and it’s a bit peculiar.

That’s because even though it actually shares every bolt with the M5 (from chassis to the engine), the 4-door coupe is faster on the road. The Sedan will do 100 km/h (62 mph) in 4.4 seconds whilst the M6 Gran Coupe is 0.2 seconds faster.

In the case of these 560 HP beasts, that’s only about half the story though. Get them on one of Germany’s famous unrestricted Autobahns and you’ll soon realize what that level of power means. As you can see in the video below, even at well above 100 km/h (62 mph) the DSC light in the dash started blipping, telling the driver that even in these dry conditions, the rear axle was skidding. That’s what 680 Nm (501 lb-ft) will do...

The car we’re looking at here was fitted with the M Carbon Ceramic Brakes (a $8,000 option) and the M Driver’s Package that allows it to blow past the standard speed limiter at 250 km/h (155 mph) and go up to 305 km/h (190 mph). If you thought it would have a hard time reaching that speed, think again! 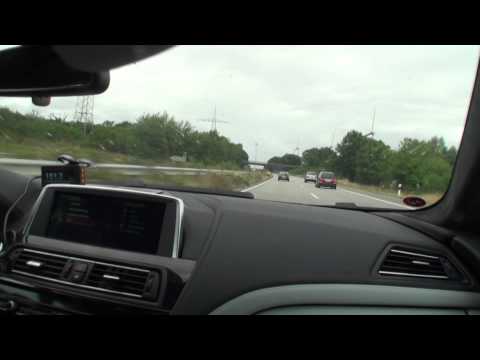