Sebastian Toma
It is a known fact that many vehicles do not offer the same power level that is quoted by their maker even after they leave the factory. While for some models, the power is underrated, others barely reach the figures announced by the manufacturer.
8 photos

The latter case is less often found but not impossible. Another well-known fact is that an engine's power may be reduced after a few years. Thankfully, we have ways to measure an engine's power, as doing a dyno is relatively affordable these days in most countries.

The reduction in power is not intentional, as it comes down to normal engine wear, but not all engines get the same level of wear. In some cases, the peak output does not drop one bit, while others suffer from dramatic losses. The latter is caused by poor maintenance, as well as the way that a vehicle has been treated by its owner.

Now, after a vehicle has passed a certain age, most people do not expect it to have its peak power available anymore. The good news is that there are things that can be done to prevent this from happening, and one of those is sticking to a strict maintenance schedule.

Also, the way that the vehicle is driven matters, so if you do not let it overheat and you never drive it hard when the engine is cold, you will have a better chance of enjoying a car with its peak power for longer.

While Drivetribe was shut down as a website, the publication lives on in social media, and Mike Fernie is still there to present his latest projects. This time, he has acquired yet another special vehicle, a BMW M5 Touring, which is the E61 generation with the naturally aspirated V10 motor.

As you can imagine, Mike is curious whether his M5's engine can still provide over 500 horsepower at the crank when the M mode is activated. Otherwise, the V10 engine runs in a more composed 400-horsepower mode, which is not at all modest.

Be sure to check out the video below to see just how much power was left in the V10 after 15 years on the road, but with a tight maintenance schedule. 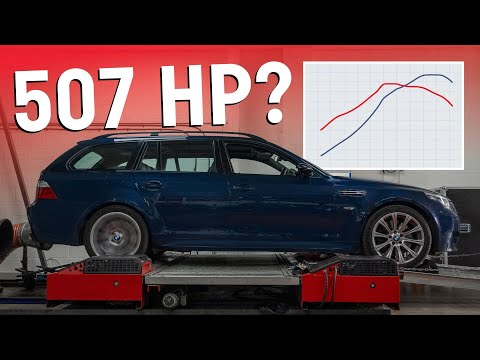