3 An Unexpected Tug of War: BMW M4 vs Toyota Tacoma in the Snow – Video

BMW M4 Gets Driven by Tui, the French Bulldog

We know it's Monday morning and everyone’s at the office, still trying to wake up after the weekend so we thought this video would be a nice picker-upper for all those petrol heads out there.
1 photo
Usually the internet goes wild whenever a new clip is launched featuring a hot model and a fast car. It gets even crazier when cats are also thrown in the mix but what about dogs? Are people as crazy about dogs as they are about hot models and cats? Probably not.

Even so, Tui here wants to share her love for fast cars with you guys and decided to show you how driving a BMW M4 is done. As you can see in the clip, she’s definitely all by herself aboard the car and pushing all those buttons and pedals. Heck, she doesn’t even need to reach the pedals, just the steering wheel will do in this instance.

All jokes and irony aside, this French bulldog is Nick Murray’s pet and a really cute one too. Nick is the Porsche nine-a-lemon guy that managed to get his money back from the German company after the car he bought proved to be faulty in a number of ways.

He then decided to get a BMW M4 and has been more than pleased with his acquisition according to his own Youtube channel videos. When you get to drive that car every day you definitely get some crazy ideas like the one we’re showing you here. At least it made our morning better, we’re hoping yours too! 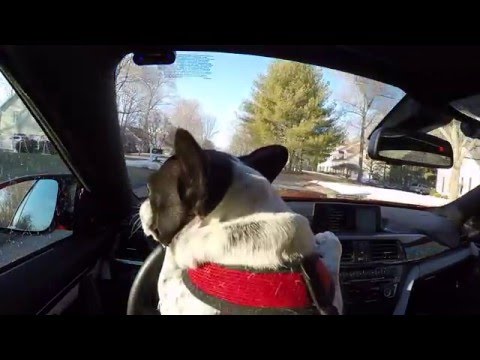