Home > News > Industry
Gabriel Nica
BMW has more than just the eight DTM M4 cars involved in the German competition. It also has the safety car to look out for, a fully decked BMW M4 dressed for the occasion. Fortunately, it’s also sporting a roar worthy of our attention, as you’re about to see.
5 photos

New photos of the BMW M4 DTM Safety Car emerged online along with a short video showing just how loud it is. The safety car is fitted with special optionals to be up to the task at hand. Apart from all those ‘awesome’ decals, the car is also wearing a light bar up on the roof, blacked out Performance kidney grille up front, a carbon fibre splitter on the front bumper, Performance mirror covers and led strobe lights int he centre air intake.

That’s only half the story though. After the car was built, it was sent to the Motorsport division to have it properly prepped. The rear seats were taken out to make it lighter and a roll cage was added to the interior to protect its occupants. All the aforementioned parts were added to the mix along with new side sills, new boot lid spoiler and a new rear diffuser. Last, but not least, an M Performance exhaust started making itself heard.

In this case however, it’s a bit different than what normal customers would get. That’s because it has no catalytic converters installed. That means it’s noisier than usual and emits more CO2 emissions. Since the Safety Car is not road legal, it is allowed to have such modifications done to it.

On a road legal car, though, the M Performance exhaust wouldn't be catless and therefore it would sound different. It's still pretty darn impressive though. 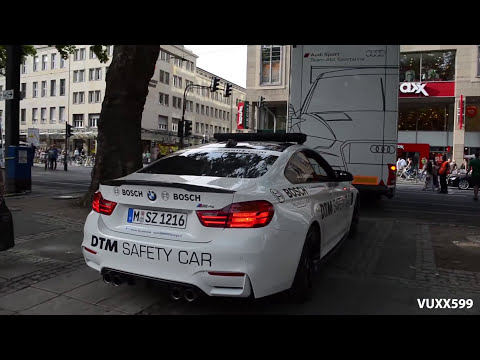