5 V8-Powered Volvo 780 Is a NHRA Monster, Looks Like a Wonderful Abomination
Car video reviews:
Up Next

Let me ask you one question. What do the following pairs all have in common: the Boston Red Sox and the New York Yankees, Alain Prost and Ayrton Senna, Valentino Rossi and Max Biaggi? Well, you can describe all of these pairs by simply saying: arch-rivals. And you could describe today's battle the same way too. The BMW M4 and the Audi RS 5 are two of the fastest coupes available on the market, but which one is the best, though?
14 photos

Naturally, some people might not even care about horsepower or torque figures when making the purchase. But chances are that if you're considering one of the two, this duel will help tip the balance one way or the other.

To make things fair, the BMW M4 is equipped with xDrive, so launching from a dig shouldn't be a disadvantage. Daniel will get behind the wheel of the Audi, while Meltem will be driving the BMW. You might not see girls at the drag strip in Europe that often, but then again, Meltem is no ordinary girl.

Going over to the M4 camp, there are usually 3 different options to choose from: the standard M4 Coupe, the M4 Competition Coupe, and the M4 Competition xDrive Coupe. Naturally, the last one is the most expensive out of the bunch, with a starting MSRP of $79,995 (destination charge included).

Judging by the official performance stats for the BMW, the fate of this race seems to be sealed from the get-go. The M4's TwinPower Turbo inline-6 engine is rated for a solid 503 horsepower and 479 lb-ft (650 Nm) of torque, all while the curb weight is at the same level as the RS 5.

With that in mind, the M4 only needs 3.4 seconds to get up to 60 mph. But let's not get ahead of ourselves here, as the human factor still has a role to play here. Daniel's reaction time was much better for the first run, so he managed to be first across the finish line.

But looking at the telemetry data, the RS 5 was slower than its opponent in every single aspect. Both cars scored better 0 to 60 mph times than declared by the manufacturers: 3.27 seconds for the BMW and 3.51 seconds for the Audi.

Over the quarter-mile (402 meters), the more powerful M4 crossed the line in 11.14 seconds, which is 0.47 seconds faster than what Daniel achieved in his car. For the next few runs, the format is changed to a half-mile (804 meters) race. This time Meltem has a great launch, and she soon manages to take the lead too.

By the time they cross the half-mile finish line, the gap is even bigger than before. Daniel asks for a rematch, but he's only making things worse for himself, as he just can't make up for the difference in horsepower and torque. The last test of the day is a roll race, and if it wasn't for Meltem's miss-shift, the BMW would have reigned supreme once more. 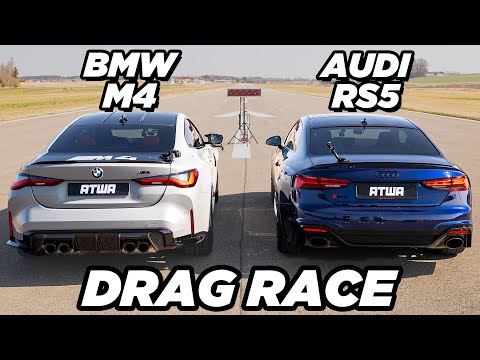