5 BMW Launches Two New Configurators on US Website
Car video reviews:
Up Next

You can go about comparing two beautiful cars in a variety of ways but you always should keep their character in mind. That being said, the guys from Auto Express set out to compare the BMW M4 Convertible with the Jaguar F-Type convertible.
1 photo
It’s rather weird that they went for the drop tops instead of the Coupes but I guess that’s all because they couldn’t get them both at the same time. Either way, we’re still in for a good time because they chose to compare the two with a drift off.

Don’t expect huge clouds of shredded pieces of tires like you see in Chris Harris’ clips but the two look really good though, even at smaller speeds and with less tire smoke. The specs
The BMW M4 Convertible is a good competitor for the F-Type but only if we’re talking about the V6 S model that we also had the chance to test out last year. Looking at the numbers they put out, it’s a close battle.

The Jaguar on the other hand has 381 HP coming out of the supercharged 3-liter V6 and 460 Nm (339 lb-ft) of torque. It’s hooked up to an 8-speed automatic gearbox that helps it reach the same benchmark speed in 5 seconds flat. Now let’s watch them duel. 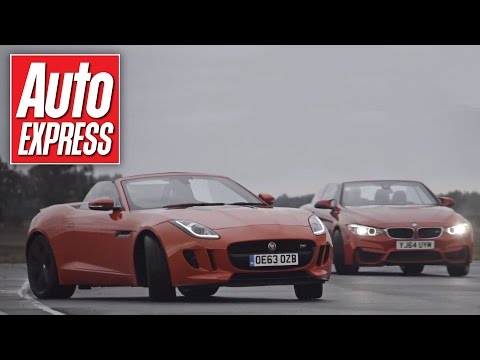