1 Fearless Mercedes-AMG GT 63 S Thinks It Can Beat the Ferrari F8 Tributo, so Can It?

Home > News > Auto Motorsport
Cristian Gnaticov
Since every petrolhead enjoys a nice drag race between two powerful yet totally different vehicles, we thought we’d share another one with you. This time, you’re about to see a premium sports coupe take on a full-blown supercar, and you won’t have to zoom in to see which one was faster.
7 photos

As the video description doesn’t say anything about possible engine mods, we are going to assume that the previous generation BMW M4 Competition and more modern Ferrari F8 Tributo were stock.

This means that the German model can deal with the 0 to 62 mph (0-100 kph) sprint in just a hair over 4 seconds when fitted with the dual-clutch seven-speed automatic transmission. The six-speed manual variant is a couple of tenths of a second slower, and in both cases, you are looking at 444 hp (450 ps / 331 kW) and 406 lb-ft (550 Nm) of torque produced by the turbocharged 3.0-liter straight-six gasoline engine.

Now, almost 300 horsepower separates the two fast cars, with the F8 Tributo holding the upper ground, so why did the driver of the Bimmer choose to race it against the exotic model instead of staying put? That’s a question that only he can answer, so let’s see just how big the gap was at the end of the run. 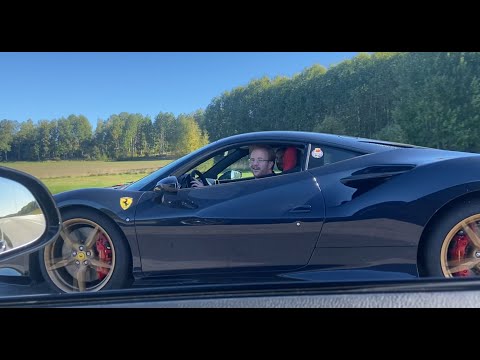